London's Design Museum has unveiled its exhibition programme for 2020, with a major show about fashion brand Prada due to open in September.

The show, called Prada. Front and Back, is described as "the first major museum exhibition of one of the world's most influential fashion houses".

The exhibition will include input from architects Rem Koolhaas and Herzog and de Meuron, both of whom have collaborated with the brand.

Other shows announced are an exploration of electronic music called Electronic, which will open in April; and a survey of trainers called Sneakers Unboxed: Studio to Street, opening in June.Electronic will evoke "the experience of a being in a club" while the sneakers show will spotlight "cult classics, limited edition silhouettes and rare colourways".

Details of the programme have been released just as the museum surpassed its previous visitor record. It has attracted 229,360 visitors to its paid programme so far this financial year, which runs from 1 April 2019 to 31 March 2020.

This is an improvement on the 2018/2019 financial year, when paying visitors fell last year to 183,392 visitors, putting pressure on the museum's finances, as Dezeen revealed last month.

The decline in ticket revenue contributed to a financial deficit, which saw the museum call in a £3 million loan from The Conran Foundation.

Lord Mandelson, the chair of the museum's board of trustees, described the financial situation as "not sustainable in the medium term" and blamed the fall in ticket sales on the "specialist focussed" exhibitions programme.

According to its latest annual report, the museum's long-term objective "is to be the most successful museum of contemporary design and architecture in the world, a point of reference for these global industries." It aims to attract "a broad audience of one million visitors annually."

Earlier this year the trustees appointed management consultants to propose ways to return the institution to profitability, and recruitment consultants were briefed to identify a business-savvy leader. Tim Marlow, currently artistic director at the Royal Academy of the Arts, will join the museum as CEO and director in the new year.

Outgoing museum director Deyan Sudjic said: "We are delighted to announce our 2020 programme, with a series of provocative exhibitions that will allow us to make the impact of design visible: from examining the technology and innovation that drive the sneaker industry to the transformation of our musical world through electronics."

"Through the prism of design visionaries such as Rem Koolhaas and Herzog & de Meuron, we will tell Prada's remarkable story in fashion," added Sudjic, who is personally curating the Prada show.

The decision to dedicate an exhibition to a global fashion house follows the blockbuster success of fashion-related exhibitions such as Christian Dior: Designer of Dreams exhibition at the nearby V&A museum, which attracted a record 595,000 paying visitors.

The V&A's previous record was held by its 2015 show McQueen: Savage Beauty, which attracted 493,043 visitors.

The Design Museum's most popular show yet was this summer's Stanley Kubrick: The Exhibition, which welcomed 169,000 paying visitors and was the reason for the record attendance figures this year.

The previous most popular show was 2017's Ferrari: Under the Skin, which received 100,000 visitors.

"Fashion has fascinated designers and architects since the days of Adolf Loos, who was constantly writing about the reasons that the Germans wore their trousers too short," Sudjic told Dezeen, when asked whether fashion exhibitions are more popular with the public than shows about industrial design or architecture. 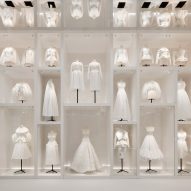 "Fashion is about making, and designing and behaviour, as much as automotive design, or user experience," said Sudjic, who announced last month that he will will step down as director in the new year and become director emeritus.

"To draw artificial lines around subjects is missing the point. It's the textile industry that triggered the industrial revolution, and the digital world."

He added: "No company has done more to work with designers and architects of all kinds than Prada. They had IDEO look at their information systems before there was such a thing as a smartphone, Rem Koolhaas and Herzog & de Meuron transformed the environment in which their clothes were sold. Prada has been consistently experimenting with new ideas and new materials."

Previous fashion exhibitions at the Design Museum include Azzedine Alaïa: The Couturier in 2018; and Hello My Name Is Paul Smith, held in 2015, before the museum relocated to west London.

In 2016 the Design Museum moved from its former home at Shad Thames in east London to its new premises in the former Commonwealth Institute in Kensington, which has an interior designed by John Pawson.