The best new hotels in Europe combine rich experiences with a subtle approaches to design say the judges of this year's AHEAD Europe awards, in this video Dezeen produced for the awards programme.

The AHEAD Europe awards, which had its ceremony in London on November 18, celebrated the best in hotel and resort design across the continent.

"What was quite lovely this year was to see a few more mature brands really step up their game and deliver great projects that were quiet and understated but still really rich," he said in the video interview, which Dezeen shot on the judging day of the AHEAD Europe awards.

The Palazzo Daniele hotel in Puglia, Italy, which was named Hotel of the Year, was commended by judges for its delicate approach to the renovation of an historic building.

The project is a nine-suite boutique hotel housed within a 158-year-old aristocratic home, and was also awarded in the Guestrooms category.

Geraldine Dohogne, interior design director at Zannier Hotels and member of the judging panel, stated that the understated approach to design draws guests' attention towards the fabric of the historical building that houses the hotel.

"They want us to focus on materials and texture," she said. "If you have a look at the guest rooms, they're quite empty, you've got the minimum that is necessary. But then the colours on the wall, the heights of the ceiling, the details of the ceiling are very present, so you focus on the building."

AHEAD judge Stefan Rier, who is also co-founder of architecture firm NOA, noted the striking self-contained atmosphere of the hotel. "You get in and you are in a new world," he said.

Heckfield Place, a restoration of an 18th-century country house by British designer Ben Thompson set within a 430-acre estate in rural Hampshire, England, was awarded by the judges in the Hotel Renovation & Restoration category.

"It is one of the country house hotels in the UK outside of London, taking a grand old building that had been maybe misused and unloved and really injecting a lot of love into it and creating a truly one-off hospitality experience," said Hutchins. "There's a maturity about it that's really quite elegant."

The Retreat at Blue Lagoon Iceland, which took home the AHEAD award for the best resort, is a hotel situated within the lava formations and blue geothermal pools of Iceland's UNESCO Global Geopark.

Dohogne remarked upon the unique experience of landscape-specific hospitality that the hotel offers.

"You have this interaction between the environment, the outdoor experience and the room and the hotel," she said. "You know that you go there to live with nature and I think they have managed to express that throughout the hotel."

Another retreat highlighted by the judges was the Euphoria Retreat, a hotel carved into the base of a mountain in Mystras, Greece which was awarded for its centrepiece spa.

The cavernous 3,000-square-metre spa features a series of elliptical spaces of various different scales connected by a network of catacomb-like passages.

"It's something totally new in the spa world, because it's an introvertive spa with this huge cupola in concrete in which you can swim, and that's so special," stated Rier. 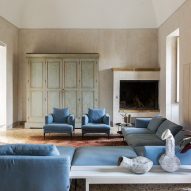 The Hotel Newbuild category was won by Mollie's Motel & Diner, a new venture from Soho House that brings the classic American concept of the motel to a rural location in Oxfordshire, England, just off a major road that runs between Bristol and Oxford.

"It's not that easy to find the courage to come up with something like that, with this typical American interior design," said Rier.

Observing the entries, Rier speculated that hotel design in Europe could have a playful future.

"I think luxury is becoming more easy going," he said. "Having fun probably is the next way to have new concepts in the hotel industry, because actually everyone wants to be a child - especially when you're on vacation."

This movie was produced by Dezeen for AHEAD. It was filmed at the CitizenM Tower of London hotel. Images are courtesy of AHEAD.