This cavernous 3,000-square-metre spa by DecaArchitecture with Natalia Efraimoglou & Partners is located within a building that is carved into the base of a mountain in Mystras, Greece.

Billed as the first holistic wellness destination spa retreat in Greece, the Euphoria spa sits between a cypress forest and the UNESCO World Heritage Site of Mystras – an important Byzantine landmark.

Its dramatic interior has been shortlisted for a Dezeen Award in the Leisure and wellness interior category.

"The Euphoria Spa is 3,000 square metres of varied and carefully articulated experiences. It is meant to be at the same time peaceful and subversive, meditative and hallucinatory, orderly and free-flowing," said DecaArchitecture.

"This occurs through a choreographed transition of spaces in which light, sound, temperature, humidity, textures, materials and smells create immersive sensory experiences."

At the base of the four-storey building, the spa's reception, underground treatment and consultation rooms, and changing facilities are spread across a series of elliptical spaces of various different scales connected by a network of catacomb-like passages.

Three concentric cylinders punctuate the building. The inner circle is a white 20-metre-deep light well, which opens to the sky and serves as a directional beacon.

A stairwell rendered in grey exposed concrete spirals around the central lightwell winding upwards though the building's four storeys.

As visitors ascend upwards a series of landings with arched openings provide views into the central light well. The higher guests climb, the less frequent the landings become making the ascent faster.

The architecture studio described the outer cylinder as an "ambulatory space cast in black exposed concrete". This concrete has been sanded down to its aggregate and sealed with wax giving it the quality of terrazzo.

The studio designed the layout of the spa's main floor to resemble the gears of a mechanical clock.

"By moving around alternate centres, the guest is provoked to experience both moments of rest and contemplation," explained DecaArchitecture. "The challenge was to instigate a moment of 'catharsis'."

The spa's indoor spherical pool has a dark spherical structure at its centre that can be entered through a series of archways.

"Floating in the center of this dark orb there is a sense of being suspended in the void of a platonic volume but also a sense of womb-like calmness," said the studio.

The spa's tepidarium connects spaces of different temperatures and humidity such as the sauna, the steam room and the cold plunge pool. The sequence of spaces is designed to engage the skin - the largest sensory organ in the human body - making it sweat, expand and contract. 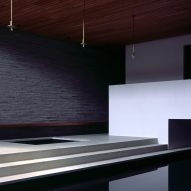 A Byzantine Hammam is the final space in the visitor's journey through the spa. Here, guests can lie down on the warm marble surfaces to be cleansed.

Further up the building's spiral staircase are small monastic chambers which serve as private treatment rooms. The final floor, which is in closest connection with the forest, has two large and bright gathering spaces for classes and conferences.

As the building retreats towards the forest, its facades are articulated using pale-red exposed concrete. To help these facades blend into the scale and context of the forest, the architects adopted a clapboard formwork technique and imprinted the concrete with wooden boards.

"We tried to underpin the experiences through the layering of geometry, historical understanding, space, motion, temperature, sound, colour and materiality," said the studio. "The ultimate goal is to engage the senses and provide an opportunity of cathartic release." 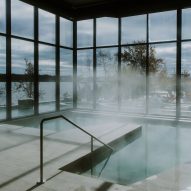 Relax in salons, spas and beachfront properties this weekend on our Pinterest boards

Other interiors shortlisted for Dezeen Awards include an office with a golden folding facade on a quiet street in Kuala Lumpur and a gothic-inspired cafe in Antwerp.