Dezeen promotion: a nine-suite boutique hotel housed within a 158-year-old aristocratic palazzo and a disused wine factory-turned-luxury resort are some of the projects to be shortlisted in the 2019 AHEAD Europe awards.

This year's edition of the AHEAD Europe awards celebrates outstanding hospitality projects completed in the region between June 2018 and May 2019.

All projects have been organised into 15 categories, which recognise everything from event spaces and hotel conversions to lodges, cabins and tented camps.

The shortlist has been compiled by an expert panel of architects, interior designers, hoteliers and industry commentators.

One of the shortlisted projects is the Dexamenes Seaside Hotel, which takes over an abandoned 1920s wine factory. Its pared-back guest suites are set inside the building's former storage tanks and look directly out over a stretch of sand on Greece's Peloponnese coast. 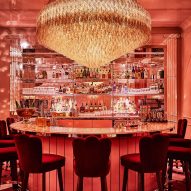 AHEAD Americas hotel award winners "reinvent ideas from the past"

Another project on the shortlist is Mollie's Motel and Diner. The roadside hotel in Oxfordshire, England has been designed with unexpectedly luxurious bedrooms and communal areas dressed with plush furnishings.

Also in the running is Palazzo Daniele, a nine-suite hotel that occupies a 158-year-old aristocratic home in Puglia, Italy.

Winners will be announced at a ceremony in London's Battersea Evolution on 18 November, tickets for which can be purchased via AHEAD's website.

First-place projects will then go on to compete head-to-head in a global biennale against winners from the other three regions covered by the AHEAD awards: the Americas, Asia and the Middle East and Africa (MEA). China's Alila Yangshuo hotel – which is set inside a 1960s sugar mill – was named as the Ultimate Winner in the 2018 awards.