Architect Mariana de Delás created a green-tile garden to keep this apartment – which was formerly a motorcycle workshop – out of sight from the busy streets of Palma de Mallorca.

Built from traditional Mallorcan limestone, the 92-square-metre Palma Hideaway is situated in the city's old quarter and was bought by its current owners as a disused motorcycle repair shop.

It had a neglected courtyard and an entrance that opened directly onto the street.

Architect Mariana De Delás was brought on board to transform the space into a peaceful apartment that optimised the building's lofty ceilings and outdoor space.

She began by creating a new "garden" at the front of the building that provides separation from the bustling street. The lower half of a pinewood wall in the entryway has been clad with dark-green tiles to create the illusion of greenery, complemented by a couple of planters.

A built-in bench seat has also been included in a nod to traditional Mediterranean courtyards.

"As the existing ground-floor access door created a very violent connection between the road and the studio, it was essential to integrate an intermediate buffer garden area," said De Delás.

"It serves as a way to get light inside and also acts as an acoustic and privacy barrier from the street."

The tiny garden sits behind a folding door made from perforated steel that allows the light to filter through while blocking the view of passersby on the street.

The apartment itself is entered through a second timber-framed glass-door that blocks out the noise from the nearby road.

"The space between these two skins can be totally or partially opened, with a large number of variations to suit every need," explained De Delás.

The material palette of green tiles and pine slats that are used in the garden is continued throughout the apartment, contrasting against the original limestone walls and traditional vaulted ceilings.

The apartment's plan revolves around a single, diagonal partition-wall which is meant to serve as both a room divider and storage space. Its diagonal positioning also guides the eye towards the rear courtyard.

To the left of the partition lies the bedroom, where the wooden floor has been slightly raised  – an attempt by De Delás to make the ceiling appear lower and thus create a cosier atmosphere.

In the all-white master bathroom, the floor has been raised enough to accommodate a sunken bath lined with the same dark-green tiles that appear elsewhere.

Social areas like the kitchen, living and dining rooms are positioned on the right side of the partition in an open-plan layout with polished concrete flooring.

A kitchen island with a green-tile countertop and chunky pink legs that De Delás designed in collaboration with young Mallorcan designers 2Monos Studio serves as a gathering point in the middle of this area. 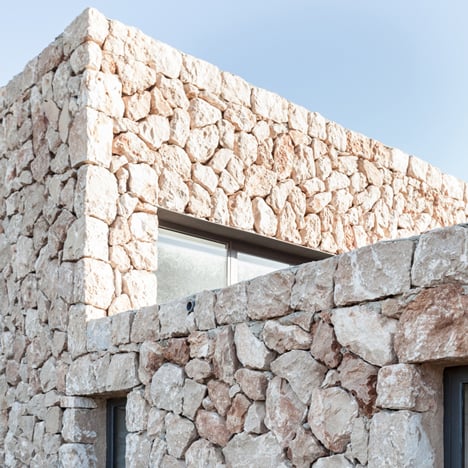 The living room and dining area are accessed through a wide glass-door. A small guest room and a secondary bathroom has then been created within a former storage space that also looks out onto the courtyard.

Back in 2014, De Delás worked with Norwegian studio Gartnerfuglen to design the Grooming Retreat – a contemplation space that a young equestrian could use before and after horse riding sessions.