Tasked with creating a painting studio for an artist in rural Mallorca, local studio Munarq has overhauled a crumbling farmhouse and added a stone-walled extension (+ slideshow).

Architect Pau Munar Comas, one of the two Munarq founders, was asked by artist Dolors Comas to create a work and exhibition space for her amongst the wheat fields outside the small town of Pla de na Tesa.

Her main requirements were for two large spaces – a exhibition gallery and a workshop – as well as high ceilings, natural north light, and some areas of visual privacy where she can work undisturbed.

"It was a great location for Dolors, who was moving her studio to seek the tranquility of this new space – air, vegetation and silence," explained Munar Comas.

The team chose to preserve and extend the existing structure, but to rework the interior to create more light and visibility. The old building was in a bad condition and was overgrown with plants, and numerous repairs had to be made to make it usable again.

Firstly, the walls of the building were stripped back to their construction materials – a mix of earth and straw that had previously been concealed behind layers of render.

An extension was then added to create an L-shaped plan with a total area of 230 square metres. The new wing features dry stone walls, built using blocks of different shapes and sizes.

Inside, a poured concrete floor was added across both of the building's two storeys. Internal walls were re-plastered and painted white, contrasting with the exposed wooden ceiling beams and staircase treads. 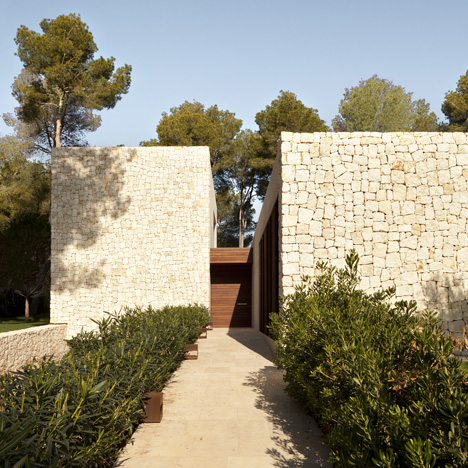 "It was very cheap for a reform – unpretentious but with style and respect for the place and existing construction," said the architect.

A glazed entrance sits at the junction between the two blocks, providing access to the gallery on one side and the studio on the other. There is also a second entrance at the end of the extension that allows the artist to bring fresh air through the building.

A courtyard is framed between the two wings. Its central feature is a well, which can be used to maintain the surrounding garden, including a prickly pear plant at the site's entrance.

Named Can Valls, the project was completed this year. Other recently unveiled artist's studios include a concrete structure half-submerged in a cliffside garden on the Chilean coastline, and a zinc-armoured studio above a brook in Scotland.

Photography is by Gonçal Garcia.