SCI-Arc founding director and celebrated Californian modernist Ray Kappe has passed away aged 92, leaving behind "a body of architecture of the highest level".

The late architect is also celebrated for his influence on Californian modernism, a style that was emerging in the 1950s as he was starting his architectural career.

His portfolio includes a range of building types and 100 custom residences that formed key examples of the style. This includes his self-designed residence, which the Los Angeles Conservancy describes as a "true icon of Modern residential architecture". In recent years, he also started developing his modular prefab construction as a more environmentally friendly design alternative.

Following Kappe's death, SCI-Arc's current director Diaz Alonso praised his "body of architecture of the highest level that will live on forever".

"His legacy as an architect, city planner, and educator is absolutely unparalleled," Alonso added.

Ray Kappe had a "profound impact" on the architecture field

His tribute was echoed by SCI-Arc co-founder and Pritzker Prize-winning architect Mayne, who also emphasised Kappe's influence on the profession. "There is much to be said about the profound impact Ray Kappe had on our field," he said.

Kappe is credited with leading the sextet that broke away from the Department of Architecture at California State Polytechnic University to establish SCI-Arc. The group wanted the new school to be more experimental with the concept of a "college without walls".

"His gift was in his ability to tolerate – no – to embrace deep and abiding differences between the people on his team," said Mayne, who is principal of Morphosis.

"There seemed to be so much at stake then, the battles were often so terribly fierce," Mayne added. "But like any gifted father figure – which in fact he was for me – he never let those details affect his unconditional positive regard for each of us."

The college opened in the 1970s with 75 students Santa Monica. It was originally called the New School, but was then later renamed SCI-Arc by Kappe, who served as directer for 15 years, and then as chairman from 1998 to 2002. Today, it is among the top-ranking architecture schools in the US.

He challenged "the status quo of what was architectural education"

"A transformative figure, he and a group of outlaws decided to challenge the status quo of what was architectural education, and changed the world of architecture forever," Alonso said. "He did it, and he did it in spades."

"SCI-Arc would not exist without Ray Kappe, and the world of architecture would not be what it is without him," he added. "His presence and gravitas has always defined the school and will continue to do so everlastingly."

Born in Minneapolis in 1927, Kappe architecture at UC Berkeley and graduated in 1951. He opened his own practice 1954 at the height of California Modernism. During his time, he built over 100 houses in the state, with many forming key examples of the architectural style. 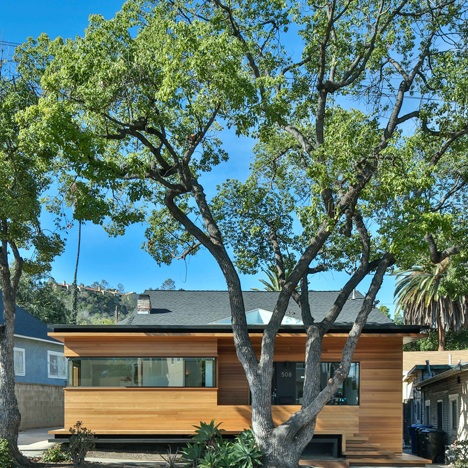 His key works include a pair of mid-century modern apartment buildings called Garden Apartment Building and National Boulevard Apartment Building. Designed with Carl Maston, the complexes employed the post-and-beam modern style, which used wooden posts and beams as the main structure, to allow for large expanses of glass.

Among his other key projects are Kappe House, which he designed for himself in 1967 for a steeply sloped site in the Pacific Palisades. Kappe created hollow concrete towers to form the foundation so the property could stagger up the hillside.

Large expanses of glass wrap the home, while the concrete columns are hollowed to also form skylights for each level.

Kappe's more recent work resurged his earlier experiments with modular, steel-framed pre-fabricated homes that he started nearly 50 years ago. In 2006, he completed the modular Z6 House in Santa Monica, with all the components built in a factory to reduce material resources.

The house, which also incorporates passive heating strategies, was recognised as one of the "Top Ten Greenest Buildings in the US" by the National American Institute of Architects one year later.

Kappe passed away on Thursday 21 November. It was reported that he died due to lung failure, following a number of episodes of pneumonia.