US architect Martin Fenlon cites the Gehry House as inspiration for the renovation and expansion of his own home – a cedar-clad bungalow in Los Angeles (+ slideshow).

Situated on a dense site, the Fenlon House is located in Hermon, a little-known residential neighbourhood just outside of downtown Los Angeles.

"The new addition to the front of the house forms a unique alliance with the remodelled existing house," said Fenlon. "This new frontispiece appears to be intimately nested within the older existing house, while maintaining a stark differentiation."

The architect removed the original gabled porch, leaving a triangular opening in the roof that serves as a skylight.

The new addition is clad in clear cedar, which visually contrasts with the dark, torched cedar wrapping the main home. The front elevation terraces down to the sidewalk, forming a long bench.

Inside the original home, the dropped ceiling was removed in order to expose the wooden roof structure.

The kitchen features economical Ikea cabinetry and wood panelling. A large window over a counter slides open, enabling use of the counter from the outside.

Other areas of the house are "punctuated by a series of built-ins that integrate everyday objects with the spaces they're in," said the architect. 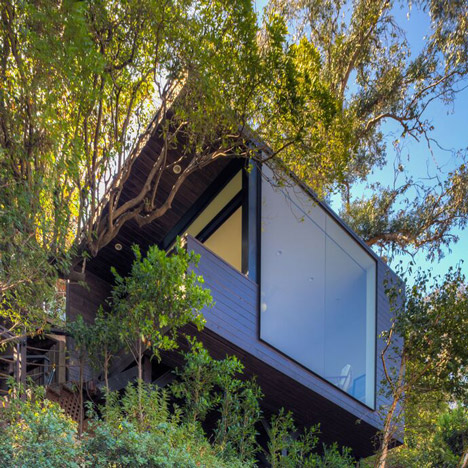 "The new walnut and teak finishes throughout are similar in tone with this existing wood, blurring the distinction between old and new," added Fenlon. "The simple combination of the wood and white plaster throughout is reminiscent of California mission architecture."

The architect said he was influenced by the Gehry House in Santa Monica, in which Frank Gehry transformed his own conventional residence into a Deconstructivist work of architecture. He removed drywall on the interior, and added plywood and chain-link fencing to the exterior.

Completed in 1978, the seminal house was Gehry's breakout project.

"Gehry's house was my biggest influence in school, so I wanted to use it as a point of reference for my own house, where the scope of work was similar," said the architect. "The goal was to modify an old house in a similar manner, creating a radical differentiation between the existing and new."

Fenlon's approach was different from Gehry's in that he wanted to merge old and new in a way that "results in a congruence instead of a conflict." He said Gehry's house was cut up and wrapped in junk materials, resulting in an "exposed and undermined" design that was a reflection of the era.

"I wanted to achieve the opposite result through similar means," said the architect, who started his eponymous studio in 2004 after working for several architecture firms, including Morphosis.

"The result is meant to be similarly expressive of the times, but conveys a sense of optimism in contrast to the cynicism of the 1970s."

From single-family homes to mixed-used skyscrapers, LA is in the midst of an architectural boom. The city has become "the hottest destination" in America for architects, said Ma Yansong of MAD in a recent Dezeen article.

Across the street, Frank Gehry is planning a mixed-use development opposite his Walt Disney Concert Hall. He is also masterplanning an overhaul of the run-down LA River, and recently unveiled plans for a five-building complex on Sunset Strip.

Photography is by Zach Lipp.

More houses in the US