New York studio Pelle has created a low table made from pieces of solid aluminium that are milled to a tolerance of one thousandth of an inch and fixed together using traditional Japanese joinery techniques.

The studio headed by Jean and Oliver Pelle designed the DVN Table as an experiment in innovative manufacturing and hand craftsmanship.

The tabletop and legs are made entirely from solid aluminium and are joined together using a tongue and groove connection that is completely concealed within the internal structure.

"We were interested in developing a language for the DVN Table that creates a sense of wonder and surprise in what otherwise is a simple form," the designers told Dezeen.

"Rather than celebrating connections of material to stay true to a specific constructive logic common to them, we liked the idea of suppressing connections and detailing while using a single monolithic material."

The way the pieces are attached is borrowed from traditional Japanese joinery and creates completely clean surfaces on both the top and underside of the tabletop.

Three solid legs with rounded profiles penetrate the table surface, enhancing the illusion that there is nothing holding them in place.

Custom-milled bits were created to precisely carve the metal components so they interlock and form the hidden, friction-based connections.

The designers described the manufacturing process and the challenge of working to tolerances as tight as one thousandth of an inch as "an invented problem" that forced them to push the boundaries of what can be achieved with aluminium.

"You can make anything work with glue or screws, but we liked the idea of simply relying on a tight fit that would not allow the legs to wobble or come off," added the table's creators.

"We felt it should be possible to do something that sounds relatively basic. Doing it in metal, not wood, added a level of excitement about the challenge as we would not be able to go back into the piece to sand it out to fit." 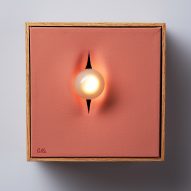 The aluminium tabletop features an irregular, hand-polished surface that was achieved using different grades of sandpaper.

The designers claimed that the tactile finish adds "a sense of depth and luxury to a material that is most commonly associated with utilitarian purposes".

Despite the intensely sophisticated processes and industrial material used in the table's manufacture, Jean and Oliver Pelle insisted that the finished piece aims to communicate more than simply how it is made.

"As much as the table celebrates precision milling techniques, it is not really about that," they claimed. "The techniques to make something are just a means to an end, not the end in itself."

"We hope that the design communicates a considered and human sensibility. This more emotional aspect of our work has always been central to what we do."

Jean and Oliver Pelle met while studying on the Masters in Architecture programme at Yale University. They established their multidisciplinary studio in 2011 to work on lighting, furniture and objects that combine an artistic sensibility with architectural integrity.

The DVN Table was presented at an exhibition held earlier this year at their showroom in Manhattan's Flatiron district, alongside other pieces including a lamp shaped like a full-sized banana leaf.

Earlier this year, the studio created lights that pop through painted canvas surfaces, like miniature artworks.