Called Incise Paintings, the collection comprises a series of lights that poke through boldly coloured and framed canvases.

Pelle drew influence from the works of Lucio Fontana, an early 20th-century Argentine-Italian painter and sculptor, for the series.

"We just wanted to make this particularly beautiful object – a painted canvas floating inside a wood frame – much like the way a mid-20th century masterwork painting is presented to us in museums and galleries," Pelle co-founder Jean Pelle told Dezeen.

Incisions are cut along the painting in specific shapes to hold the bulbs, while maintaining the rigidity of the canvas.

The dark voids created by the slits are intended to give an "illusion of depth". "If you look closely, you only see black and nothing much else," said Pelle. 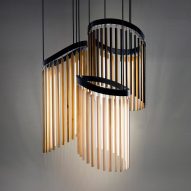 The canvases are encased by deep oak frames that hide the electrical components behind. The lights are operable by twisting a dimmable knob on the frame's underside.

Pelle, which Jean runs with her husband Oliver, conceived the idea for the Incise Painting series when they were trying to hide an elevator shaft window in their Manhattan showroom.

They first chose to create a framed painting the same colour of the room's walls, and then had the idea to incorporate lighting.

"It was really meant to be quite analog, straightforward and simple," said Pelle.

"Once we created it, we saw other possibilities and wanted to cut through the painting to insert points of light," she continued.

Each canvas painted in one of four colours: ivory, terracotta, pale blue, and blue-violet.

The Pelles, who were trained as architects, founded their design studio in Brooklyn in 2011. The duo moved their studio and showroom to Manhattan's Flatiron District in 2016.