Woodford Sheppard Architecture has completed a minimal wooden church in a remote town in Labrador, Canada.

Our Lady of the Snows is located in Sheshatshiu, a small isolated village with 1,300 residents located in Canadian province Newfoundland and Labrador. The area is a settlement of indigenous people of Eastern Quebec and Labrador, known as the Innus.

The project was commissioned by the Sheshatshiu Innu First Nation Band Council, the local institution that governs the village, to form a community amenity for religious and secular users in the village.

"Situated on the banks of Labrador's Lake Melville, Our Lady of the Snows Catholic Church stands against an impressively rugged landscape, one that is characteristic of Canada's northern regions," said architectural office Woodford Sheppard.

"While the intention of the building's design was to create a visible landmark within the community, the new church endeavours to not overshadow or dominate its neighbours."

The 422 square-metre building is sited in the centre of the town, on the shore of Lake Melville. It draws inspiration from Moravian church design, which is found throughout the region, and vernacular Innu and First Nation's influences.

Moravian Protestants first reached Canada's East coast in the 18th century. This branch of Christianity has Germanic origins, and its architecture typically displays austere features. This tradition still survives throughout Newfoundland and Labrador. 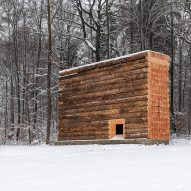 Wood is the primary building material and was used for the building's structure, cladding and interior finishes.

The selection was "carefully chosen from the limited number of materials that are available in this remote region, further responding to Sheshatshiu's vernacular character", according to the architects.

Although the building is primarily a Catholic church, the architects sought to be inclusive of non-religious community activities. To do this, they created two separate areas within the building's open floor plan.

The main portion of the building is a traditional nave, where congregants gather for weddings, funerals, baptisms and mass.

Plywood lines the walls of this space. It has almost no ornamentation save for 14 depictions of Jesus bearing the cross designed and fabricated by the architects.

The apse was reimagined as a community space for smaller secular meetings in the rear of the church.

"Positioned in what is traditionally known as the apse, this intimate gathering area combines architectural elements familiar to both Catholic typologies along with Innu ones," the firm added.

This room was oriented towards the Mealy Mountains, a formation that defines the region's horizon beyond Lake Melville. This volume is taller than the rest of the building, and its high ceilings are formed as an asymmetrical trapezoid, lit with recessed linear lights.

At the back of the building, towards the village, an entrance porch is carved out, protecting visitors from the weather and providing a gathering space outside. The structure's tall, narrow windows with pointed tops and a discreet spire call out the religious programme inside.

Other religious structures include a high-rise church in Hong Kong by Rocco Design Architecture, and an all-white church in Italy, that was built by inmates of the La Dozza penitentiary.

Photography is by Julian Parkinson.