The Grand Park Hotel in Rovinj, Croatia, is topped with a series of planted terraces that step down towards the Adriatic Sea.

Designed by local practice 3LHD, with interiors by Italian architect and designer Piero Lissoni, the hotel has been designed to step down from the town centre to the seafront while having a minimal impact on the natural landscape.

The hotel is the "final touch" in the wider redevelopment of the area, which has seen 3LHD design several other hotels as well as a concrete promenade that runs alongside the hotel.

"No matter where they are in the hotel, the guest gets the impression they are staying in a park overlooking Rovinj, St Euphemia, the island of St Catherine and the most beautiful sea sunset," said the practice.

Seeking to "blend into the existing forest", space has been made for five pine trees that have been growing on the site for decades and now occupy a prominent position on the hotel's first floor terrace.

Split into three areas, the hotel rooms occupy the first three floors of the structure, with the fourth floor containing a conference area and a "wellness terrace", which extends to an indoor and outdoor pool on the top floor. 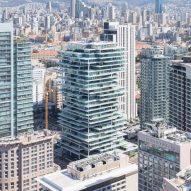 The interior spaces on each floor plate are set-back, allowing for a large planted area that wraps around the rooms at each level to give the impression of being surrounded by greenery that extends into the horizon.

The ground floor has a cafe, bar, restaurant and concept store, overlooking the promenade through a glazed facade, and in the lobby a triple-height light-well draws in natural light.

The interiors by Piero Lissoni use earthy tones to contrast the blue of the sea and sky, and terraces have been given wooden decking.

Wood lines the conference space, which overlook the sea through a vast window, and the rooftop pool is encased in a glass pavilion with a glass sliding door that can be raised to allow guests to swim outside.

"Public spaces are characterised by a multitude of details, a large number of types and specific pieces of furniture that, despite mutual diversity, make a unique story together," said the studio.

3LHD was founded in 1994 by Saša Begović, Marko Dabrović, Tanja Grozdanić Begović and Silvije Novac. Previous projects by the practice include the conversion of a cinema in Zagreb into a dance centre, and a large cultural and sports centre in Zamet.

Photography is by Jure Zivkovic.