Designer Shaakira Jassat has created a rain-catcher that is slim enough to fit on the outside of buildings in dense urban environments.

The Aquatecture panel is designed to collect rainwater as it trickles over the openings in the structure before pumping it into a building's grey-water system.

Jassat, who is the founder of Studio Sway, was inspired to create the panel after observing drought conditions in her native country of South Africa. She said that people in cities like Cape Town and Pretoria had lived in fear of Day Zero – the day the taps would be shut off.

The designer, who is now based in the Netherlands, noted that while water-harvesting equipment such as rainwater tanks were a familiar presence in rural environments, that is generally not the case in cities, where space is at a premium.

Her design would allow urban residents to sustain their own needs by channelling rainwater into the building's grey-water system, where it can be recycled along with the waste water from sinks, washing machines and other appliances.

"The main goal was to create a water harvester that would fit in dense urban spheres through its compactness, visual identity and ability to integrate into architecture," Jassat told Dezeen.

While the primary purpose of the panels is to catch rainwater, Jassat says that, if hooked up to other equipment, they could potentially also pull water from the atmosphere via condensation.

The panels are made of stainless steel, chosen for its durability and rust resistance. They are studded with perforations in a slim, rounded funnel shape, which Jassat settled on after testing several potential patterns.

She came up with patterns ranging from circles to fan-like shapes in collaboration with Japanese graphic designer Aya Kawasaki and tested them by making prototypes and showering them with water to simulate rain.

She selected the most efficient design and modified it until she was "satisfied with the combined efficiency and aesthetics".

Jassat's next step will be to test the design in situ on a building facade. She has also recently conducted research into "air plants" (the tillandsia and bromeliad species), which draw all their water needs from the air.

Jassat is interested in "how architecture can evolve to embrace water as we enter the Symbiocene era". The Symbiocene is posited as an aspirational new era to follow the Anthropocene, with humans living more symbiotically with nature. 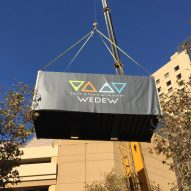 Jassat exhibited Aquatecture alongside the air plants research at Dutch Design Week. A 2019 graduate of Design Academy Eindhoven, she has started her own practice called Studio Sway.