Japanese studio Nendo has designed a clock that becomes a perfect cube twice each day.

The Cubic Clock is formed of a solid brushed-aluminium cube that balances on one corner. It has two shard-like hands set on another sliced-off corner.

Designed to celebrate the 40th anniversary of luxury watch retailer The Hour Glass, the clock aims to "blur the lines between art, design and watches".

Rather than adding extra "unnecessary parts and materials" to the clock, the studio cut two slivers of aluminium from one of the corners to form the hands.

The clock only "reveals its true form" twice per day – at midday (12:00 pm) and midnight (12:00 am). These are the times when the long and the short hands vertically align to complete the cube.

Throughout the rest of the day, the angular hands overlap one another 22 times. According to Nendo, this configuration gives the impression "as if time is reset after completing a twelve-hour cycle".

"For but a moment, all indication of time disappears and the mind is offered a chance to reset," added The Hour Glass.

"The unconventional form and clever subtlety of the cubic clock embodies all the thoughtfulness, humour and refinement which defines Nendo as a design studio," said The Hour Glass. 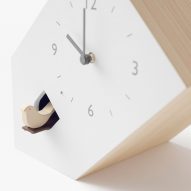 "It is of course an object which tells the time, but is also an object of our time whose form and aesthetic captures the very best qualities of good design today," it added.

The Cubic Clock was designed for The Hour Glass' anniversary exhibition, titled Then Now Beyond, which is running until 31 January 2020 at the 8,000 square-foot Malmaison by The Hour Glass emporium in Singapore.

The company collaborated with different creatives, including Snarkitecture co-founder Daniel Arsham, to "challenge our perceptions of time and blur the lines between art, design and watches".

The clock was made as a limited edition series of 10, and is available to buy at the Then Now Beyond exhibition.

This is not the first time Nendo has created a playful take on the typical clock design. The studio previously designed three unusual variations of the traditional cuckoo clock, including one that doubles up as a bookend, and one that rests on its roof.

Back in 2017 it also launched the inaugural collection from its new 10:10 watch brand, which saw curved timepieces shaped to look like the window of an aeroplane.