American company Heliogen has managed to concentrate solar energy to temperatures of more than 1000 degrees Celsius – hot enough to provide a fossil-fuel-free way to make concrete.

The company creates ultra-high heat using a precisely aligned array of mirrors to focus sunlight onto a single target — a technology it describes as a "multi-acre magnifying glass".

Its breakthrough means that in the future solar thermal energy could be used for industrial processes that currently require the burning of fossil fuels.

Chief among these is the production of cement, which requires high temperatures to form a composite from a mix of materials such as limestone, chalk and slate that are then ground into a powder.

As the key ingredient in concrete, cement is behind an estimated eight per cent of global greenhouse gas emissions, leading to calls for architects to switch to other materials.

But Heliogen's technology could create the ultra-high heat required for its production via the sun, lowering concrete's carbon footprint. Around 50 per cent of cement's CO2 emissions come from the chemical reaction of converting calcium carbonate into calcium hydroxide, however, so those would remain.

"We've made great strides in deploying clean energy in our electricity system," he said. "But electricity accounts for less than a quarter of global energy demand." 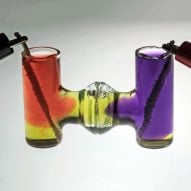 "Heliogen represents a technological leap forward in addressing the other 75 per cent of energy demand: the use of fossil fuels for industrial processes and transportation."

The company named steel and petrochemical production as two other industrial processes that it could potentially power.

Heliogen's patented system relies on a computer-controlled array of mirrors that precisely direct sunlight onto a target on a nearby tower and receiver. Magnified by the mirrors, the captured sunlight is equivalent to more than 1,200 suns, according to Heliogen.

In order to produce fuel, the company will need to achieve even higher temperatures – at least 1,500 degrees Celsius. At this heat, it could be used to make fuels such as hydrogen or syngas – a fuel comprising a mixture of hydrogen and carbon monoxide.

Heliogen's system is different to photovoltaic (PV) solar panels, which are used to power the electricity grid, and more like the solar hot-water systems some people have in their homes.

At Heliogen's scale, the solar thermal system could be more efficient and take up less space than the equivalent PVs.

The company currently has one commercial facility in Lancaster, California. It launched this week with the announcement that Microsoft co-founder Bill Gates, the world's richest person, was among its high-profile investors. 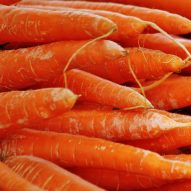 Carrots could be key to stronger concrete

Gates said Heliogen technology was "a promising development in the quest to one day replace fossil fuel".

"Today, industrial processes like those used to make cement, steel, and other materials are responsible for more than a fifth of all emissions," Gates said. "These materials are everywhere in our lives but we don't have any proven breakthroughs that will give us affordable, zero-carbon versions of them."

"If we're going to get to zero-carbon emissions overall, we have a lot of inventing to do."

Carbon emissions from concrete could one day be further lowered by combining Heliogen's solar thermal power with tweaks to the chemical process, such as MIT's proposed carbon-capture technique and Lancaster University's strengthening nano platelets from carrots.

However, some architects and experts have argued that the climate emergency leaves no time for incremental measures and that the industry should switch to more sustainable materials such as timber.