American studio Faulkner Architects has transformed a rustic building in northern California into a simple dwelling sheathed in salvaged redwood and weathering steel.

The project, called Tack Barn, entailed renovating a 1950s, gabled-roof building that once was used for storing saddles, bridles and other horse-related equipment. Adjoining the building was a shaded area for horses topped with a shed roof.

The building is tucked into a hillside in Glen Ellen, a village in Sonoma County with a deep agricultural heritage. The famed novelist Jack London lived in the area for many years before his death in 1916.

"Attracted by the same aspirations as Jack London a century before, a San Francisco family of four and repeat client came to us with the request to reclaim the old barn as living space," said Faulkner Architects, a studio with offices in Berkeley and Truckee, both in California.

The goal was to convert the barn into a little retreat where the family could stay on the weekends as they researched the area and built a new full-sized residence, which was completed in 2018.

The clients requested a minimalist space with areas for sleeping, bathing and light cooking. The adaptive reuse project involved significant alterations to both the interior and exterior, with many original elements kept in place.

The original structural frame, made of Douglas fir, was retained, helping preserve the building's history. Exterior walls were wrapped in a redwood rainscreen, and the roof was covered in weathering steel. 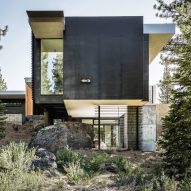 Within the building, the team removed a sleeping attic and installed a new concrete floor slab, replacing a gravel floor. Two wooden columns were removed and replaced with steel versions.

Encompassing 839 square feet (78 square metres), the overhauled tack room features an open living space, a kitchen with a sink and refrigerator, and a compact bathroom with a shower.

A radiant floor heating system keeps the space warm during cool weather. A propane boiler heats up water that circulates through the floor, along with heating up water used for cooking and bathing.

The porch uses no mechanical heating or cooling, enabling the project to meet a local rule that prohibits accessory structures from exceeding 850 square feet (79 square metres).

Throughout the building, the team used an earthy material palette that includes salvaged Douglas fir and redwood. In the main living area, large pendants by LifeSpaceJourney hang overhead.

Overall, the architects sought to update the building for contemporary use while honouring its history.

"The intention here was to maintain and use the embodied energy of the familiar barn in the neighbourhood while allowing signs of human inhabitation to be subtle but evident," the team said.

Faulkner Architects, which was formed by Greg Faulkner in 1998, has completed a number of residential projects in the American West. Others include a remote getaway in California that was designed to preserve existing boulders, and a family dwelling in the Sierra Nevada Mountains that makes use of wood, glass and textured concrete.

Photography is by Joe Fletcher, unless stated otherwise.