Menswear designer Craig Green's latest contribution to the Moncler Genius project are voluminous puffer ensembles that can be deflated for travelling.

This marks Green's third collection released as part of the Moncler Genius initiative, in which a cast of different designers share their take on the "Moncler identity", including the brand's hallmark down jackets.

The newly released project builds on the same oversized visual language as the previous two, whose outsized frames seem to almost swallow their wearer and variously resemble flotation devices or tents and kites.

This time around, colour-block jackets, parkas and base layers are padded out with pillow-like down panels on the neck, arms and legs.

Crucially, unlike his previous creations, the items can also be flat-packed into a compact, easily transportable unit about as big as a sleeping bag, and following a similar packing process.

After the arms are folded into the back and the hood disappears into a designated compartment in the collar, the pieces are rolled in on themselves and fastened together with black straps.

The design process was guided by down's distinctive quality of appearing bulky and heavy from the outside, while actually being lightweight and easily condensed to a fraction of its original size.

To facilitate this, the black straps act as a functional element as well as a stylistic one, to help constrict the material. Zippers that hold the different components together are especially designed to extract air as they are being closed. 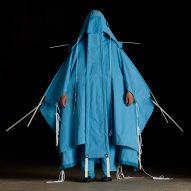 Together with the Moncler team, Green also developed a new way of structuring the individual down compartments, leaving a 2.5 centimetre gap between each to act as a hinge along which the pieces can be folded.

The sets come in dual tone colourways, featuring one shade on the front – ranging from bright red to robin's-egg blue – while the backs feature utilitarian shades of black and grey.

Beyond his three Genius projects, Green has also created three other collections for Moncler.

"Moncler has a strong heritage but still embraces change," the designer explained of his close collaboration with the brand. "They encourage an experimental approach and are not afraid of taking risks, which makes them a great collaborative partner."

The latest stage of the project, called the Moncler Genius World Tour, is seeing the collaborations launched via dedicated presentations in different locations around the world. Green's took place at the Kith shop in New York at the start of December.

Before that, Valentino's Pierpaolo Piccioli and designer Liya Kebede presented their puffer evening dresses at this year's Milan Fashion Week in the tunnels underneath Milan Centrale train station.