Craig Green and JW Anderson are among the eight designers who created fresh takes on the puffer jacket for Moncler's extensive 2020 Genius collection at Milan Fashion Week.

Each of the eight designers' offerings were displayed in a room of their own that had been erected especially for the show inside an industrial concrete warehouse.

Padded scarves with cushioned spikes and full-length puffer evening dresses in rainbow stripe were worn by models walking runways decorated like spaceships, cinemas or a forest of inflatable trees.

"In its third edition, Moncler Genius keeps on evolving and exploring new horizons, different categories and novel approaches to communication that give a voice to personal creativity," said the brand.

"Times move, Moncler Genius moves. Moncler Genius reaffirms itself as an open concept that is driven by experimentation and crosses the lines of conventions," it continued.

"Its DNA lies in reinvention. Its reason to be is to decode the customers' behaviours, expectations and emotional connections."

British fashion designer Craig Green wanted to "push simplicity to the extreme" when creating the 5 Moncler collection, which is his fourth offering for the brand.

Green worked exclusively with a very lightweight yet sturdy fabric – micro rip-stop nylon – to convey ideas of transparency, security and protection, using the process of down filling to make flat materials three-dimensional.

Each of the garments engulf almost every part of the model, bar a pair of hands or a chin poking out, and forms one of two main looks.

A series of monochrome designs resemble padded hazmat suits, while others that look like brightly coloured rubber dinghies.

Moncler recruited Anderson for his "arrestingly clever vision of gender-defying fashion", which offers a modern take on masculinity and femininity through a cross-over of menswear and womenswear.

Embellished with cushioned perforations and spikes, the looks were displayed on a circular stage interspersed with blow-up columns.

Anderson contrasted matte and shiny materials, and filtered in elements of both countryside attire and stereotypical city fashion.

Quilted bonnets and frilled puffer shorts were paired with bags decorated with inflatable versions of metal chains and footwear that resembles hiking gaiters, which are typically worn over the shoe and lower trouser leg as protective gear. 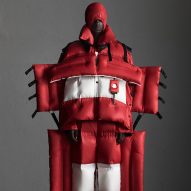 "The technicality and straightforwardness of Moncler are fascinating to me," said Anderson. "A down jacket needs to respond to a function, and I kept that in mind adding my own taste for blunt abstraction”.

London-based designer Richard Quinn combined 1960s flower-power with a space-age dynamic in the 8 Moncler collection, which is tied together with his signature striking prints that both match and clash.

All-in-one garments saturated with bold daisies, psychedelic patterns and bejewelled details were worn with feathered headpieces by models walking down a Space Odyssey-style runway, alongside floor-length puffer gowns in rainbow stripes with both hooded and off-the-shoulder versions.

"It is very much my interpretation of Moncler's technical expertise, exploring fabrications and silhouettes but bringing it all under the female gaze in my idea of modern femininity," said Rocha.

Other designers included Sergio Zambon and Veronica Leoni, who created the 2 Moncler 1952 collections, Sandro Mandrino with his 3 Moncler Grenoble line, Matthew Williams with the 6 Moncler 1017 ALYX 9SM range and Hiroshi Fujiwara with his 7 Moncler Fragment collection. 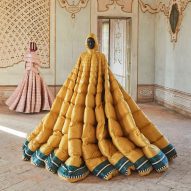 Three additional accessory collections were also launched at the event on 19 February, including a canine couture range by luxury dog clothing brand Poldo, an electric bike by Copenhagen-based startup Mate.bike and a collaboration with luggage brand Rimowa.

The Moncler Genius project was originally launched at Milan Fashion Week in February 2018.

The following 2019 edition saw Piccioli create a collection of vibrant puffer full-length evening dresses, some with padded hoods and bulbous sleeves and others fully off-the-shoulder with large bows at the back.

Green's 2020 offerings build on the same design language as his previous creations, which are often made up of oversized, pillow-like down panels that seem to consume the wearer.

The designer recently designed a series of voluminous colour-block jackets, parkas and base layers that can be deflated for travelling.