Visitors to a booth at Design Miami were invited to damage furniture created by Georgian design duo Rooms.

A number were designed to look vandalised, like a bench graffitied by Tbilisi designer Max Machaidze, and were intended to be reminiscent of public pieces found in Post-Soviet Georgia, an era marked by new freedoms and artistic expressions.

"A notion of privacy and personal belonging – a basic concept for most - was difficult to comprehend for a society that was raised in a socialist country," Rooms founders and designers Nata Janberidze and Keti Toloraia said.

"At school, one could find knife-carved desks and chairs," they added. "The same story was continued on benches in public spaces with names and personal messages rigidly scratched into them."

Works in the collection were painted and etched with graphics and words similar to the "hidden protests" and "personal marks" left behind by citizens after the regime fell.

"In Circulation explores both the visual appeal of these historic objects as well as the reason behind such trashing," the studio continued. 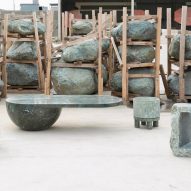 "Perhaps the desire to perform an act of destruction was a hidden protest against the system where nothing belonged to an individual," it said. "Or maybe it was motivated by the desire to privatise everything that was public by leaving a personal mark."

Two Bus Stop Benches, one made of wood and the other of stone, formed the centrepiece of the exhibition.

Visitors were also encouraged to carve their names or other messages into the wood seat. Georgian hip hop and visual artist Max Machaidze spray-painted graffiti words and phrases on the stone version of the bus-stop seat, modelled on the shape of those installed in soviet countries between 1922 and 1991.

An iron floor lamp, with a rounded shade attached to a rectangular stand, matched a chandelier that hung from an iron chain and frame also displayed in the studio's booth. Both light fixtures represent "iconic and forgotten public objects" from Georgia's past.

The artists aimed to express deconstruction through an oversized chess set. Play pieces made from sculpted wood and even metal feet were created for an elongated chess board table. "The Deformed Chess Console and sculpted symbolic Chess pieces convey the idea of deconstruction itself," they added.

Other works in the exhibition that embrace the former Soviet country's designs are the low-lying Stone Carved Supra coffee table with various-sized glossy patches and Lions at Night, a hand-knotted rug designed by Italian company Cc- tapis, produced in Nepal.

Design Miami 2019 took place from 4 to 8 December, with exhibits including hanging chairs by Porky Hefer influenced by the form of molecular compounds and a green cabinet of curiosities created by designer Daniel Arsham.

Janberidze and Toloraia founded Rooms in 2007, and have previously presented some of the featured pieces in an exhibition at Milan design week and a showcase of female designers at this year's NYCxDesign festival.

Rooms' other projects include the conversion of a Soviet-era building into the boutique Rooms Hotel in Kazbegi. The studio designed the overhaul with Georgian hotel group Adjara, which creatives have credited for prompting Georgia's cultural renaissance.

Photography is by Guram Kapanadze, unless noted otherwise.