Rather than following the format of a traditional booth, Arsham created the colourful volume to be kunstkammer, or cabinet of curiosities, showcasing his latest collection.

Green frosted-glass panels form the walls of the structure, with windows and doorways that allow visitors to enter or peek into the open-plan living area and study set-up.

"Arsham moves away from the traditional constraints of an art fair, transforming the space into a kunstkammer that is both recognisably part of Arsham's narrative and breaks new ground," said New York gallery Friedman Benda.

The home-like layout is a nod to the origins of the collection, which Arsham started working on while furnishing his home in New York's Long Island.

Inside, the floor of the space is covered with a rug decorated with the floor plan and furniture arrangement in the property.

A number of the designs on show are distorted, or abstracted, following on from Arsham's previous explorations, which included a dystopian New York exhibit containing icons of American pop culture reimagined in a future setting.

For example, the desk in the study space and a chair in the living area, titled Shanghai, are both cast in resin. The forms appear to have large chunks missing, as if they is disintegrating.

"The works on view are a continuation and further exploration of Arsham's iconic and immediately recognisable practice of creating fossilised 'future' relics that distort the viewer's perception of space and time," the gallery added.

The desk is paired with a variation of the designer's blue and beige upholstered Cleveland chairs. The white-resin chair, meanwhile, is accompanied by the Paris Chaise Lounge – a sofa adorned with similar beige and blue fabric. 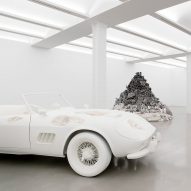 The booth also features two light fixtures; the huge standing Philly Lamp arches over the space and the small blue Pasadena Sea Glass Lamp rests on the ground alongside the desk.

Other details include a row of three Queens Studio Shelves at the rear of the booth. Each unit, made from wood and acrylic, is decorated with figurines, books or trinkets.

Arsham, who also co-founded of architecture studio Snarkitecture with Alex Mustonen in 2008, has completed a number of other installations. They include a bright blue Japanese tea house placed inside an Atlanta art museum and a cave of purple spheres.

Design Miami is taking place from 4 to 8 December 2019. Crosby Studios' founder Harry Nuriev and Balenciaga have also teamed up for the event, creating a  transparent vinyl couch stuffed with worn and discarded clothing from the French fashion brand.

A number of installations, exhibits and events are taking place in the Florida city this week, to coincide with both Design Miami and Art Basel.

Highlights include a bent swimming pool sculpture by Elmgreen and Dragset and a sand-covered traffic jam on Miami beach by Leandro Erlich.