New renderings and details have been released about the two-tower residential development for Toronto that musician and fashion designer Pharrell Williams is working on with local studios IBI Group and U31.

Reserve Properties and Westdale Properties released updated images of the exterior and interiors of Untitled Residences to follow the announcement last month that Williams is collaborating on the project.

Exterior renderings of the two buildings show that they will be detailed with jagged balconies. Lead architect Mansoor Kazerouni from IBI Group said the team used parametric design tools to create shapes from the sound waves in Williams' song Gust of Wind.

"We arrived at the concept fairly early in the process and worked with Pharrell to select a song that really meant something to him and could help bring this idea to life," said Kazerouni.

"Once we had the song, there was a lot of testing and iterating to find the right notes that would produce the most fluidity," Kazerouni added. "What's cool is as you go around the building, no two faces are the same."

Untitled Residences will be built in the city's midtown neighbourhood Yonge and Eglinton and contain 751 condominium suites – ranging from studios to three bedrooms. They will be joined at the base by a stone podium.

Williams has also teamed up with interiors studio U31 to develop the decor for inside the residential building. Renderings show dark and moody interiors with an abundance of exposed stone.

"The palette is fairly unique in how it emphasises darker tones balanced with natural materials," said U31 designer Kelly Cray. "They combine to create these really compelling environments."

The walls and floor of the lobby, for example, will be covered with charcoal stone. Renderings also show that a waterfall will run down one of the walls facing the windows onto a patio.

"To me, the key elements were water and space," said Williams. "With water moving in the building the way it does, there's this continuous flow of motion that's recharging to people." 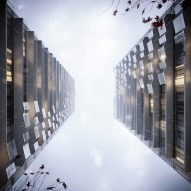 Pharrell Williams turns to architecture with United Residences in Toronto

Other details include a row of thick columns and large blocks of stone placed intermittently on the floor.

Different finishes will then be used to distinguish areas in the development's amenities – which will encompass 32,000 square feet (2,972 square metres).

"Everything is engineered towards supporting the function of the room," Cray said. "When we transition into the gym or the rec room, the palette shifts to brighter tones in specific spaces to encourage activity and play."

The facilities will include a wellness centre, which will feature a long swimming pool that extends from the inside to outside, where it will meet a 20-foot-tall (nine-metre-tall) water feature. A yoga studio, "co-working garden lounge", cinema room, fitness centre and a children's club will also be included in the development.

In addition to Untitled Residences, the developers will construct a rental building that will contain 413 units – including 200 affordable housing units, 165 mid-range units and 49 market units.