Measuring 9.5 metres high with a floor area of 640 square metres, Apis Cor built the structure for the Dubai Municipality. The company claims it is the largest 3D-printed building ever built.

Apis Cor developed a gypsum-based material to run through the printer, which was sourced for a local producer.

The printing took place out in the open, to prove that the technology could handle a harsh environment without humidity and temperature control.

Apis Cor's 3D-printing machine was moved about the site using a crane to re-position it so it could build different parts of the building.

The building sits on conventional foundations, and the 3D-printed formwork for the columns was reinforced with concrete and rebar.

Pre-cast slabs were used for the floors, and conventional windows and roofs were added by a contractor once the walls were printed. 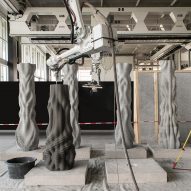 "The project gave us unique knowledge and invaluable experience that will help us improve our technology and develop a new version of our 3D printer," said Nikita Cheniuntai, CEO and founder of Apis Co.

"This project is a huge step forward in the concrete 3D printing industry."

In 2020, Apis Cor has plans to use its 3D-printing machine to build affordable housing in the US states of Florida, Louisiana and California.

The company has also set its sights a bit further away than planet earth, designing a habitat for Mars for a NASA competition.

3D-printed buildings can be quick to build and low cost. A group of architects in America have used mud to create prototype 3D-printed earth structures, and Italian 3D-printing technology developer WASP is working on a 3D printing machine that can build houses from soil and and agricultural waste.

The designer Yves Behar is working on what could be the world's first 3D-printed community, a neighbourhood of homes for low income workers in Latin America.

Earlier this year the world's longest 3D-printed bridge opened to pedestrians in Shanghai.