Civil engineering company Ramboll has worked with locals in Lombok, Indonesia, to build three quake-proof housing prototypes that are made almost entirely out of bamboo.

Described as "template houses", the standardised bamboo structures were designed by Ramboll with local charity Grenzeloos Milieu and University College London (UCL) in the wake of several earthquakes in Lombok in 2018.

The project seeks to provide locals with a blueprint for homes that are resistant to collapse in earthquakes, but also sustainable and affordable. The company hopes to encourage a move away from esoteric construction methods like concrete and brickwork that can require detailed knowledge.

"People in Lombok often look to the west and big cities striving to build large concrete houses. Unfortunately, only very few can afford it and even less can afford a proper design," explained Marcin Dawydzik, structural engineer at Ramboll.

"As a result, majority of the houses are a mixture of concrete and brick, or timber and concrete, none of which are sufficiently reinforced and have resulted in over 300,000 collapses and almost half a million people without a roof over their head," he told Dezeen.

"Through the design and construction, the simple and beautifully finished houses have attracted the attention of the locals, who all have said that they would love to live in this house as it looks 'safe and beautiful'."

The template houses were the result of the Ramboll team visiting Lombok after a string of destructive earthquakes struck the island in 2018. According to Dawydzik, the damage and consequential loss of life was exacerbated by the collapse of "hastily and poorly constructed concrete buildings".

It also forms part of a larger "bamboo-circular-economy" scheme being developed by Grenzeloos Milieu with a local university. The project is growing bamboo forests and teaching locals to harvest the crop for food, craftsmanship and construction with the aim of empowering them.

"Communities tend to work together and working on these houses has brought them a sense of pride, long overdue after the earthquake," explained Dawydzik.

The houses take the form of small pitched volumes raised on cross-braced bamboo columns. A central staircase leads up from the ground into an enclosed living space. 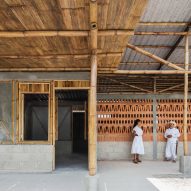 Eight eye-catching homes made from bamboo

Bamboo was chosen as the primary material for the project as it is a renewable resource – growing naturally all over Indonesia, and reaching full strength in just five years.

The three template houses were built by Ramboll in collaboration with skilled local bamboo workers and non-experienced locals in a bid to encourage knowledge transfer and upskilling.

Each structure uses multiple construction techniques that have each been developed to meet design codes while providing locals with an array of options when recreating the structures.

The walls of each house are finished with bamboo in the form of either woven sheets or smaller bamboo canes.

Meanwhile, the roofing is made out of locally sourced, recycled tetrapack in the form of corrugated sheets. Tetrapack was chosen as it is lightweight, making it suited to an earthquake resistant building, while also offering a reflective surface that helps to keep the heat out of the building.

Inside, the dwellings have space for two bedrooms upstairs, while the majority of the ground floor is open to allow for air circulation and to provide shelter for motorbikes and manual crafts.

On one side of the houses, Ramboll has attached a living area that is intended to evoke a Beruga – an outbuilding that is commonly built next to Lombok houses for working and eating.

Now complete, the three housing prototypes are open to the public and will be utilised as community spaces and shelter in case of an emergency.

Ramboll will run building workshops for locals in collaboration with Grenzeloos Milieu, and there will be accompanying step-to-step construction manuals kept inside so the community can learn to replicate the structures for their own dwelling.

The blueprint for the prototypes are now being refined and developed by Ramboll with UCL, using details from studies carried out on the bamboo during construction in order to understand the material better.

Ramboll's long-term aim is promoting the wider adoption of safe and sustainable housing solutions across additional earthquake-prone regions like Lombok.

Other quake-proof buildings on Dezeen include a secondary school in northern Thailand by Vin Varavarn Architects that raised above the ground on metal stilts, and a concrete house by Apollo Architects & Associates in Tokyo that has a pointy wooden roof.