Design studio Superflux has built a vision of a typical Singapore home in 2219, with features including homemade hunting tools, snorkelling equipment and a mini hydroponic farm.

Superflux founders Anab Jain and Jon Ardern imagine that climate change will completely change the way people live their lives over the next 100 years, as day-to-day survival becomes increasingly difficult.

With the installation Mitigation of Shock, currently on show at the ArtScience Museum in Singapore, they have created a fictional home that responds to the issues of "extreme weather conditions, economic uncertainty and broken global supply chains".

It is equipped with tools that occupants might need to source food and water, as well as to travel around the city.

The designers see the project as optimistic rather than dystopian. They hope to show that humans are a resourceful species, able to radically adapt to new situations and environments, and invent new ways of living.

"For us, Mitigation of Shock is not apocalyptic, but instead a pragmatic vision of hope, emerging from a dystopian future ravaged by climate change," explained Ardern.

"On a personal level, it can be difficult for people to imagine how an issue like global warming might affect everyday life for our future selves, or generations to come," he continued.

"Our immersive simulation merges the macabre and the mundane as the social and economic consequences of climate change infiltrate the domestic space."

Superflux first created the Mitigation of Shock installation for an exhibition at the Centre for Contemporary Culture (CCCB) in Barcelona, imagining a flat in London.

The new version takes the idea to Singapore, a city with a far greater urban density.

At the apartment entrance, visitors are greeted by a kayak – an essential in city where rising sea levels have caused the streets to flood.

The view through the window reveals what this new streetscape looks like. An aluminium shutter fronts the window, to protect the home during intense storms.

The apartment is filled with various species of plants and funghi, as well as insects, in order to create a self-sufficient eco system. Computers are used to ensure this system is optimised. 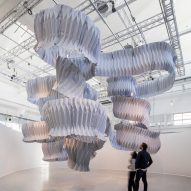 There are also various tools in the home for hunting or catching fish, made from repurposed electronics, plastics and other objects. These include spears made from old circuit boards and a bamboo snare.

On the bookshelf are titles including Pets As Proteins and How to Cook in a Time of Scarcity, while the newspaper tells the story national food shortages and energy rationing.

"Lack of political will further perpetuates panic," she continued. "There is a real lack of alternate narratives and visions of how we will live together in a post-anthropocentric society."

"Mitigation of Shock aims to show people that other worlds are possible. Together, the city view, the tools, the artefacts, the plants tell the story of adaptation and extreme measures people have had to make to, not just survive, but prosper in a post-climate change future."

Superflux typically works on projects that explore what life will be like in the future. It was one of the first studios to imagine drones being used in cities for surveillance, traffic control and advertising.

However Ardern describes Mitigation of Shock as "one of the most ambitious projects we've undertaken in our ten year history of bringing the future to life".

It is on show at the ArtScience Museum in Singapore as part of the exhibition 2219: Futures Imagined until 5 April 2020, and forms part of the Singapore Bicentennial.