Scottish designer Nick Ross has created a range of curvy seats for Danish brand +Halle, to offer respite from an overstimulating world.

Proto is a series of chairs, a sofa, a bench and a stool, designed to make a sitter feel safe and secluded.

Designed for busy environments, from the workplace to public buildings like hospitals and airports, they offer an opportunity for quiet escape.

"I envisioned Proto in places where you may be vulnerable, needing a safe corner in a landscape of uncertainty," said Stockholm-based Ross.

"Hospitals are an interesting setting, or any space where you need that inner feeling of security. And perhaps bigger workspaces, where you want to speak to a selected few in a crowded space, using Proto to foster an intimacy that often gets lost today."

Ross came up with the design after being asked by +Halle to develop something in the spirit of a dwelling. This led him to think about primitive forms of architecture and refuge.

The idea takes on new significance in today's world, where digital technologies increasingly prevent people from switching off.

"I was thinking literately about what I felt the word dwelling meant, and it brought me back to an early type of refuge," explained Ross. "I wanted to create a feeling of a primal place, for instance, tucking yourself into a corner."

The distinctive feature of the Proto chairs and sofa is a curving backrest that wraps tightly around the back of the sitter. 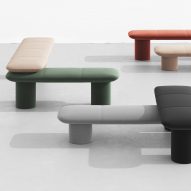 This comes in two different heights, allowing either partial or full seclusion. There is also the option to choose between a backrest that opens out at the front, or stays tightly closed in.

The seats can be upholstered in various fabrics, although +Halle is presenting it in earthy shades of green, yellow, brown and beige. The fabric seams are left exposed, creating a small detail around the profile.

"Highlighting the outline of the collection was an important dialogue with +Halle throughout the design process," said Ross. "The outer seams are not an application +Halle normally use, but something that brings a resilient and crafted look."

Ross was one of three designers that +Halle invited to create a piece of furniture responding to the theme of dwelling.

All three teams interpreted the brief very differently. Form Us With Love created Levels, a series of overlapping upholstered benches, while MSDS Studio developed a high-level bench for leaning against in public places.

Proto is the design that takes the idea of shelter the most literally. "I wanted to translate the feeling of sitting in a small tent in bad weather. I was after a basic type of dwelling, and an instinctual feeling," he added.