This pine-clad summer house on a rocky outcrop on a small island in Sweden's archipelago of Gothenburg features minimal plywood interiors designed to highlight the island's dramatic landscape.

Created as a holiday home for a retired couple, Villa Vassdal was designed by Gothenburg-based Studio Holmberg to blend with its coastal surrounds.

The house is built on an island with historical connections to Gothenburg's fishing and shipping industries. Today the island consists of family houses that are occupied year-round as well as holiday homes that are mostly used in the summer.

Overlooking the sea and surrounded by exposed cliffs and wild vegetation, the house's low profile is made up of a cluster of pitched roof volumes. Arranged in a staggered layout, the volumes are designed to blend in with the rocky landscape.

The house is oriented so that the clean-lined interior spaces take in views of the sea but are also shielded from the neighbours and the glare of the sun.

Studio Holmberg chose to clad the house's roofs and facades in untreated heart-pine to match the cliffs. Sourced from the north of Sweden, the pine will weather over time gradually becoming more grey and enabling it to blend with its environment even better.

Each of the four volumes that make up the house are allocated a specific function. The first is for sleeping and bathing as well as storage, the second is for cooking and dining, and the third is for the living room.

The fourth smaller volume at the back functions as a tool shed but is also used as a summer guest room for the clients' grandchildren. 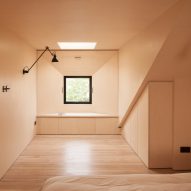 The volumes' staggered layout also creates a number of sheltered outdoor spaces for dining and relaxing.

The house's external heart-pine cladding is echoed in the calming interior spaces where walls and ceilings are lined in birch plywood.

"The minimal expression aims to highlight the volumes, with the same material used for the walls and roofs," Studio founder Mathias Holmberg told Dezeen.

"Birch plywood adds a texture with a natural pattern, although a very subtle one, creating a monolithic expression and mirroring the wooden exterior facade. It also provides a warmth to the interior that both contrasts and connects with the raw cliffs outside."

The house is entered from the back allowing guests to move from a sequence of smaller spaces into the large open-plan living area with views out to sea. 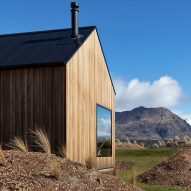 Spread across two of the pitched roof volumes, this living area combines a space for dining, a kitchen and a living room with a wood burning stove. A grid of floor-to-ceiling shelving spans the rear wall opposite two large sets of sliding double doors that open out onto a large deck with views across the water.

Bedrooms and bathrooms are located in a third volume to the south of the open-plan living area. A master bedroom with views of the sea opens out onto the front deck, while a hallway with wardrobes and a small office area leads to a second bedroom, a utility area and a bathroom, which are positioned at the back of the property.

Studio founder Mathias Holmberg told Dezeen that he wanted each of the interior spaces to maintain a close but different relationship to the exterior.

"Moving through the house provides a choreographed experience with shifting sight lines, culminating with a view out towards the sea," he explained.

"It's also designed from the perspective of everyday living. There is a separation of functions with possibilities for both interaction and seclusion or also for two different activities taking place at the same time, according to the clients wishes and needs. There is a visual connection between almost all rooms, but at the same time a clear division of space."

Holmberg said that the concept of blurring of the indoor and outdoor space is also extended to other functions and spaces within the house. For example, the corridor extends to the facade where there is a home office, while the kitchen and dining room extends into the living room.

In 2010, Swedish studio Tham & Videgård Arkitekter completed a concrete summerhouse with a zigzagging profile on an island in the Stockholm archipelago. Oriented towards the bay, the wide and shallow house was designed to stretch across its site like a line of boathouses, creating five pitched rooftops with varying proportions.

Photography is by Markus Bülow.