Hundreds of black glass yams line the interior of this cylindrical pavilion at the National Gallery of Victoria (NGV), designed by architecture studio Edition Office – Dezeen's Emerging architect of the year – and artist Yhonnie Scarce.

Titled In Absence, the pavilion explores the physical legacy of Aboriginal people's dispossession as a result of colonial land theft in the 18th century.

It's the winner of NGV's fifth architecture competition, which invites practices to propose a temporary structure to occupy the Grollo Equiset Garden.

Sitting on a paved area of the garden, the cylindrical form of the pavilion are made of dark-stained Tasmanian hardwood and bisected with a full-height cut.

A path runs through the cut, aligned with with both the entrance to the museum and the bridge leading into the garden.

Inside, two opposing circular chambers are lined with hand-blown glass yams – designed by Scarce – that appear to be dripping down between the black planks of the interior.

The cut-through and the voids within each half of the pavilion are intended as a reference to the colonial strategy of "terra nullius" or "nobody's land".

Colonisers declared Aboriginal settlements in Australia empty to allow for their seizure, dispossessing indigenous communities of their land and livelihoods. 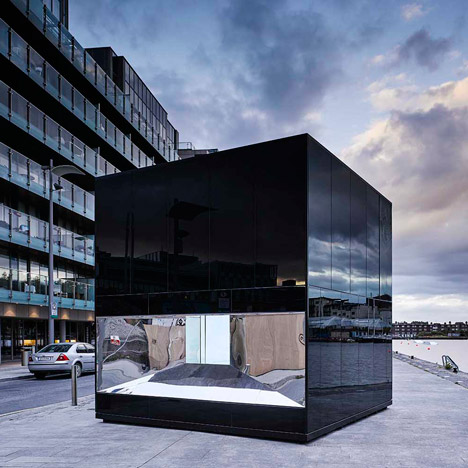 "In Absence speaks directly to the richness of architecture, agriculture and industry of the traditional custodians of this land, the presence of which sadly lies hidden within the deep myopic shadows of this nation's history," said the practice.

As well as yams, they invoke oil from fish, medicinal tree sap and eels – which are traditionally smoked inside charred, hollow trees reminiscent of the pavilion's voids.

As the sun moves over the garden, the light passing through the circular opening at the top of the void moves across these glossy black forms.

Scarce described the effect as "the glittering light of the memories and echoes of thousands of years of occupation."

A low black wooden bench offers a place for reflection.

The previous pavilion commission saw practices Muir and Openwork create a mist-filled "chasm" in the garden of the museum, which was also recently host to an exhibition of the work of artist MC Escher designed by Nendo.

Edition Office, an Australian architecture studio based in Melbourne, was named Emerging architects of the year at the 2019 Dezeen Awards.