French lighting manufacturer Sammode has relaunched a collection designed in the 1950s by Pierre Guariche, including a standing lamp with a perforated "sail-like" diffuser.

The selection of desk lamps, floor lamps, wall lamps and pendants reissued in 2019 by Sammode are typical of Guariche's innovative approach to mass-produced furniture and lighting.

A pioneering force in French industrial design during the postwar period, Guariche set up his own design agency in 1951 to create furniture and lighting that utilised the latest manufacturing processes to make them as affordable as possible.

Nearly 70 years later, Sammode has chosen to return some of Guariche's most iconic lighting designs into production using contemporary components and technologies.

Each of the products displays an intelligent use of materials to produce an appropriate and comfortable level of light.

The lamps are also defined by their use of rational forms and clever mechanical details such as adjustable balance arms, cantilevers and counterweights.

"Pierre Guariche designed the full range of luminaires to cover all the needs identified for a given space," said Sammode Studio in a statement accompanying the products' rerelease.

"His luminaires are hugely comfortable and convenient in use, with no visible light source and an appropriate quality of light, whether intended for general lighting or traffic areas, to create an atmosphere or for a specific use, soft, powerful or even diffused by reflection."

The lamps are made mostly from metal, which is bent, formed and folded into sculptural forms. The light is reflected by the metal surfaces or dispersed through perforated surfaces to lend it a softer, more ambient quality.

Among the relaunched designs is the G30 standing lamp, also known as the Kite. It features a white-lacquered perforated steel shade resembling the sail of a boat that is supported by mast-like brushed-brass poles.

The G3 wall lamp has a perforated metal grille that creates a soft, diffused light. The metal surface is folded into an angular shape and can be tilted to direct the illumination as required.

Perforated metal also forms the exterior surface of the circular G13 ceiling lamps, which feature a glass Fresnel lens to cast a diffused light down onto the space below. 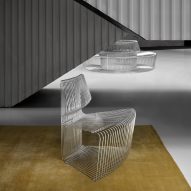 Bond villain chair designed by Verner Panton back in production

Guariche designed the G25 wall lamp to be used above a dining table, but its adjustable brass arm makes it suited to use in a range of contexts. A sculptural metal reflector at the end of the arm casts a diffused light into the room.

Guariche was prolific in the field of lighting design during the 1950s, creating more than 40 pieces for French manufacturer Disderot. He was also an architect and interior designer, and in 1965 was awarded the René-Gabriel Prize that recognises "designers of innovative, democratic and affordable furniture of high quality."

Other examples of classic designs relaunched in 2019 include a counterbalanced table clock designed by Richard Sapper in 1960 and a chair by Verner Panton that featured in a James Bond film.