Yellow walls meet stark-white furnishings and colourful terrazzo fixtures inside this bright Beijing apartment, which has been overhauled by MDDM Studio.

Spread across the top two floors and roof terrace of a five-storey residential building on the north side of Beijing, House P was designed by MDDM Studio for a young family.

The studio, which has bases in Beijing and Berlin, reconfigured the 300-square-metre apartment to create large open-plan living spaces.

The lower floor accommodates a living area, dining room, playroom and kitchen. Bedrooms and bathrooms are situated on the upper floor, while the large roof terrace features a study.

Both floors are enlivened by bright yellow paint which is used generously across walls and built-in furniture.

The studio said that the home's vibrant colour palette – tempered with cement flooring and white-coloured wood and metal fixtures – is designed to reflect the energy of the young family that live there and create a warm light throughout the day.

"We studied many different colour combinations for the built-in furniture and the surrounding wall," Momo Andrea Destro, the studio's co-founder, told Dezeen.

"The yellow was the solution to bringing a positive energy into the house and preserving a certain minimal touch with the white furniture and staircase."

On the lower floor, the existing staircase was demolished and partitions were removed. Large openings with sliding doors were also inserted into several existing structural walls to improve the movement between different zones in the home.

"The result is a continuous flow between living room, entrance, dining room, kitchen and playroom," said the studio.

Terrazzo panels made with green, orange and beige stones are used in the kitchen, bathroom and playroom, and used to create the base of the stairs.

"We wanted to use a material that could bring together the cement finishing of the floor and ceiling with the yellow walls," explained Destro.

"The colourful terrazzo is produced in the south of China by a specialized manufacturer who assisted us on a careful selection of the stones." 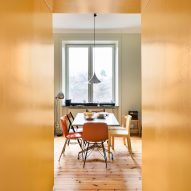 Turquoise accents that complement the colour of the green stone in the terrazzo can be seen on the home's sliding doors, kitchen cupboards and a panel of glass in the bathroom.

To link the three levels, MDDM Studio inserted a staircase and landing made from perforated white steel panels. The perforations allow daylight from the west-facing, full-height windows in the stairwell to penetrate through into the rest of the home.

"During the late afternoon, the play of light and shadow of the stairs creates a special atmosphere inside the apartment," added the studio.

As well as three bedrooms, the upper floor also accommodates a laundry area and a corridor that leads to an outdoor terrace.

This terrace, which runs along the entire length of the houses' south side, also connects to the master bedroom. The space features an ash wood-lined recess with a built-in bed, as well as a row of white wardrobes.

"As the house is playing with a very simple colour scheme, we wanted to give the master bedroom a more articulated and warm atmosphere," Destro told Dezeen.

"The niche with the bookshelf and the bed is made in ash wood; a relaxed space for the parents to rest."

Yellow is a popular colour choice for studios looking to liven-up residential spaces.