Developed in collaboration with Mallorcan tile manufacturer Huguet, the three objects each comprise a cuboid-shaped pedestal made from white and peach terrazzo tiles.

The surfaces are punctured by circular openings that reveal a ribbed terracotta pipe for transporting water to the upper basin.

Two of the designs feature spouts that allow water to overflow and trickle along external channels to reach the ground.

The main source of inspiration for the Three Isles birdbaths is the symbolism found in Korean garden design, where the number three is commonly used as the basis for the landscape design.

"It is fascinating to see how often things in Korean gardens come in a set of threes," Yang pointed out. "Three islands in ponds, three trees on each island, and three rocks on islands."

In addition to the symbolic importance of triplets in Korean culture, Yang's design is informed by the history and functional requirements of birdbaths.

"Three islands are created based on the utopian ideology, and also function as a resting ground for birds and other small creatures," said the designer.

"Thus, we hope to deliver the idea of coexistence between nature and humans by building three modern architectural islands for birds to rest," he added. 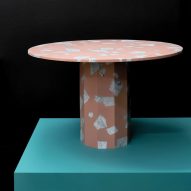 The theme for this year's Handmade project was Love, which made the designer think of lovebirds.

His birdbaths also aim to evoke the attributes of generosity, forgiveness and kindness that are essential in a loving relationship.

Yang had never worked with terrazzo or terracotta before, but he was able to use the materials to create playful and original forms that evoke both Mediterranean and Asian influences.

Robin Grasby also utilised terrazzo in a collection of tables made from a self-developed material called Altrock, which comprises marble offcuts suspended in resin.