Chinese furniture design is looking back to its cultural roots and reinvigorating past techniques, materials and forms, say authors Charlotte and Peter Fiell. Here they pick six items from their latest book that show how.

Since the mid-1990s a definable movement in contemporary Chinese furniture design has been growing with a "snowballing momentum", argue Charlotte and Peter Fiell.

In their recently published book, Contemporary Chinese Furniture Design, the authors introduce the work and ideas of the leading protagonists of what has become known as "New Chinese Design".

They believe that the quality and innovation of the furniture will force a reappraisal of contemporary Chinese design, tipping the balance of international influence from west to east.

"Over the last couple years, we have been on the most remarkable design adventure while researching this book," said Peter and Charlotte Fiell.

"Our various research trips took us to nine different Chinese mega-cities as well as countless towns and villages, where we visited not only various designers' studios, but aligned craft workshops, factories, showrooms, dedicated museums and even a number of private homes." 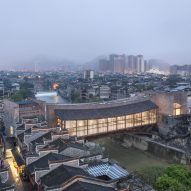 The Fiells met and interviewed the key pioneers of New Chinese Design, to better understand what was going on in China's contemporary design scene.

"What we discovered was an extraordinary pool of design talent, which completely redefines the west's concept of what Made in China really means," they said.

New Chinese Design is a design reform movement born out of a craft revival, which they describe as "21st-century Sinocentric national romanticism".

"That is super important because today, in our increasingly interconnected world, what happens in China in terms of design and manufacturing has an impact not only within its borders, but elsewhere, too," they explained.

The movement looks to the remarkable legacy of the Song and Ming dynasties, reimagining them to make the most of modern techniques and materials.

Jerry Chen's design journey is an extremely unusual one, in that he has been able to transform his well-honed connoisseurial appreciation of Chinese art and antiques into a rare creative force that has resulted in his producing some of the most accomplished examples of New Chinese Design to date.

Born in Taipei, Chen inherited his love of collecting from his mother, and as a child collected antique textiles, before moving into archaeological finds as a teenager. He initially studied ballet dancing and stage design, but abandoned these to follow his real passion: collecting antiques.

As he notes: "Collecting fuels the desire to learn, enriching life. Over and above that, collecting inspires cultivation and rumination." But what it also does is help the collector to acquire an exacting "eye", which can then be applied to the design of contemporary objects.

And that is exactly what Chen has done through a remarkable series of furniture designs, which have been painstakingly handmade by skilled craftsmen using complex Ming-era joinery techniques.

Inspired by the elegant sweeping lines of calligraphy, Chen's seating designs are intended to convey the fluidity and transparency of space and time, while rekindling the ancient Chinese scholarly spirit and formal aesthetics of Ming-style furniture.

In 2009, the designer Jiang Qiong Er established, with backing from the Hermès Group, the exclusive lifestyle brand Shang Xia, with the aim of preserving and revitalising traditional Chinese craftsmanship by expressing it through an exciting new language of contemporary design.

One of Shang Xia's most impressive feats to date has been the execution of a series of furniture pieces created for it by the renowned lacquer master, Gan Erke.

These are made from a high-tech, lightweight yet strong carbon-fibre composite material that has been painstakingly coated with multiple layers of lacquer and carefully polished to reveal a distinctive nodular pattern.

This ancient lacquering technique, known as bo luo (rhinoceros skin) because of its distinctive patterning, was rediscovered by Gan from old treatises and took him many years to perfect.

In the vanguard of contemporary Chinese design, Xu Ming and Virgine Moriette of Studio MVW playfully mix ancient Chinese forms and motifs with a more modern, western sensibility in order to create furniture pieces that have an undeniably Sino-French élan.

Their sculptural design-art pieces are stylistically diverse, ranging from their solid Xiangsheng patinated bronze side tables, which channel the core Chinese philosophy that the balancing of opposites achieves harmony, to stunning neo-deco boudoir pieces that feature pink Burmese jade in gravity defying constructions.

It is, however, their BlooMing series that perhaps expresses the studio's ability to transform age-old Chinese forms into something refreshingly original.

As playful Neo-Postmodern re-imaginings of the classical Ming vase, each of the designs in the series features this well-known, archetypal Chinese form, which opens up or "blooms" to reveal its intended function as a cabinet, console or suspended ceiling light.

Song Tao is a legendary figure in Chinese design circles, having been the first director of Beijing Design Week, as well as an important pioneer of the New Chinese Design. His design-art furniture pieces often combine age-ravaged wood with gleaming metal to create a dynamic tension between old and new, ancient and modern.

Song's Modern Fossils series, which includes his Osseus bench, is likewise inspired by China's dynamic and changeable environment, and seeks to question the concept of time and the significance of history.

The acrylic-encased "denaturalised" wood, which looks like slabs of amber, is a metaphor for modern urban society, while the bronze bamboo elements represent youthful vitality growing out of the past, which is symbolised by the use of ancient "fossilised" wood.

Throughout his career as a designer, Song's work has blended ancient Chinese philosophy with a western contemporary mindset, and his furniture cleverly juxtaposes Oriental craft culture against Occidental minimalism. His goal has always been to revive the "Chinese spirit" but in a very contemporary way.

One of the young rising stars of contemporary Chinese design, Zhang Zhoujie is at the very forefront of professional practice, using revolutionary and disruptive computer algorithms to create furniture unlike anything ever seen before.

Indeed, his furniture is not actually designed by him per se, but by the generative computer algorithms that he and his team create.

For over a decade Zhang has been working on his evolving Digital Object/ Triangulation Series, which is inspired as much by the Taoist philosophy of spontaneity as it is by the parametricism movement, which he first encountered in 2009 as a visiting researcher at London's Architectural Association.

The irony is that the designs of one of his origami-like chairs and tables are created in just a couple of seconds of digital processing, but are then painstakingly constructed using traditional hand-welding and polishing technique over a couple of months.

Through this on-going series, Zhang's aim is to perfectly combine design function with a naturalistic growth process using computer algorithms, as he puts it, expose "the natural beauty of digital logic."

Yuan Yuan thinks the obsession with historic Song and Ming furniture forms is a mistake because they tend to reflect a combination of Confucianism and Manchu imperial power, and therefore represent only a very small element of Chinese culture.

In terms of her own highly sculptural designs, Yuan prefers to draw inspiration from a wider cultural landscape in order to create work that references ancient and traditional Chinese themes, while also being perfectly suited to today's lifestyles.

Her goal is to build a more internationally appealing language of contemporary Chinese design that will enrich people's lives.

Her Light Fan screen cleverly incorporates traditional rigid, scallop-shaped fans into its construction, while her Stone Vision chaise-longue references literati culture, in that interestingly shaped rocks, known as gonshi, were traditionally used for contemplative purposes by scholars and were considered essential items in their study rooms.

Many of her designs are inspired by the strong connection between Chinese culture and the natural world. As Yuan explains, "I believe nature is an enduring theme that serves as a bridge between the past and the future, the East and the West."