Mercedes-Benz has revealed its take on the vehicle as a "living creature" with the Vision AVTR concept, which takes design cues from the sci-fi fantasy film Avatar.

Dubbed the Vision AVTR, the design takes its name not only from the Avatar film it was inspired by, but also stands for "Advanced Vehicle Transformation".

Unveiled at this year's Consumer Electronics Show (CES) in Las Vegas, the concept car embodies the German car brand's vision of what mobility will look like in the distant future, with scales and a crab-like movement.

The Vision AVTR is a more imaginative version of Mercedes' Vision EQS luxury saloon car unveiled in September 2019 at the Frankfurt Motor Show, which is set to reach production in 2021.

Both models feature the same structure that Mercedes-Benz calls a "one bow" proportion, which centres on a stretched profile with a long cabin, short bonnet and trunk, and expansive doors.

The AVTR, however, boasts a design inspired by the world of Pandora – the fictional universe where director James Cameron's Avatar film is set – and its blue humanoid creatures, in a bid to demonstrate a new way that people, machines and nature can interact.

A total of 33 "bionic flaps" are embedded into the back of the vehicle to emulate the scales of reptiles. These scales can communicate information to the driver and to the car's surrounding environment via subtle "flowing" gestures.

The front and rear axles of the car can be driven in the same or opposite direction, enabling the car to move sideways by around 30 degrees "like a crab", as well as forwards and backwards, giving the vehicle an animal-like presence.

"We didn't want to create a car, we wanted to create something like a living organism," said Mercedes-Benz chief design officer Gordon Wagener in the keynote speech at CES 2020.

"We created a futuristic vehicle that had to authentically look like it came out of this amazing sustainable [Avatar] world," he added.

"It is a vehicle that is able to enhance the capabilities of your own body – like the idea of an Avatar in the movie."

A multifunctional control element running through the centre of the car's interior acts in place of a conventional steering wheel, and allows the car and driver to connect via biometric readings. 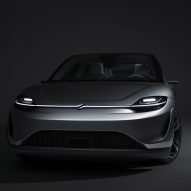 The vehicle is able to recognise the passenger's heartbeat and breathing after placing their hand on the control unit.

If the passenger lifts their hand, a menu selection is projected onto their palm, which they can use to select different driving functions.

In a bid to create 100 per cent recyclable batteries, Mercedes-Benz's Vision AVTR concept also incorporates battery technology centred on a graphene-based organic cell chemistry that is free of "rare earths" and metals such as nickel and cobalt.

The materials used to make the battery are compostable and fully recyclable, making the car free from fossil resources.

The Vision AVTR interiors are also made from sustainable materials such as vegan leather seats, with a floor made of rattan.

"The definition of the luxury of the future is about the fusion of beauty and intelligence," said Wagener. "The AVTR vision embodies that redefinition of luxury by combining the beauty of nature with the responsibility of sustainable luxury for our planet."

Head of Mercedes-Benz Cars, Ola Källenius, presented the Vision AVTR concept in a keynote speech at the electronics event, together with director and Avatar creator James Cameron – who was also behind the 2019 sci-fi blockbuster Alita: Battle Angel.

Elsewhere at CES 2020, Sony revealed a driverless, electric concept sedan called Vision-S as a way of flaunting its advanced electronics technologies that aim to contribute to safer and more reliable driverless mobility.