American artist James Casebere has produced a series of staged photographs portraying a future world in which people are forced to build shelters to escape catastrophic flooding.

Casebere created the series titled On the Water's Edge to draw attention to issues relating to climate change and, in particular, the need for humans to respond creatively to the threat posed by rising sea levels.

"Forty per cent of greenhouse gases are created by buildings," the artist told Dezeen, highlighting one of the key factors contributing to global warming. "It's imperative that we reduce that number drastically through design, insulation, and alternative energy sources."

"The impact is inevitable and architects must take responsibility for reducing it," he added, "as well as adapting to a more precarious, dangerous, environment."

An interest in architecture and coastal living led Casebere to develop the project, which is a follow up to a set of images he created in 2016 based on the buildings of Luis Barragán.

The Emotional Architecture exhibition at New York's Sean Kelly Gallery presented a stylised version of Barragán's buildings, which the artist recreated in miniature and photographed to express the sense of spirituality inherent in the spaces.

For On the Water's Edge, Casebere looked to the future rather than the past, whilst incorporating some of Barragán's values into the design of the futuristic hybrid structures he modelled at his studio in Pittsfield, Massachusetts. 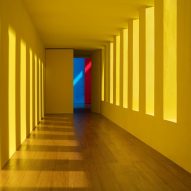 "Climate change has been a concern of mine," he said, "and for years I had been strangely enamoured of a 19th-century lifesaving station at Caffey's Inlet on the Outer Banks of North Carolina."

"So, I began to create my own structures for the beach; lifesaving stations as social infrastructure for migrant populations fleeing the devastation of ever-increasing storms – safe spaces for a drowned world."

The models are made from foam core, paint and plaster, with the effect of water created using melted resin that is carefully shaped with a heat gun and placed onto a painted wooden base.

Backgrounds are compiled in Photoshop using Casebere's own images or shapes based on his personal memories.

Casebere said his abstract refuges reference the work of architects as diverse as Herzog and deMeuron, Japan's Akihisa Hirata and Costa Rican firm Studio Saxe, as well as residential buildings he encountered near Puerto Vallarta in Mexico.

In particular, Paul Rudolph's Florida houses, built between 1946 and 1961 in response to their subtropical setting, informed the idea of creating structures that appear to be in perfect synergy with nature.

The composite ensembles are intended to suggest a new form of social space that is a hybrid of various architectural forms, including lifeguard stations, bath houses, beach houses, hostels and emergency shelters.

"I may be inspired by, influenced by, and I might even steal from existing buildings, but I am trying to create new spaces out of that, to generate possibilities and new thinking about the future," said Casebere.

Despite their realistic appearance, the buildings have an unfinished quality that means they seem ready to welcome any refugees seeking shelter.

The artist added that it was an ambition to "collaborate with others to get things built for the more vulnerable around the globe", but stated that the objective of his photographs is simply to provoke an emotional response in the viewer.

"They are done to inspire others and [are] not concrete finished designs," he pointed out.

The photographs that form the On the Water's Edge series were created for an exhibition that opened on 11 January at Galerie Templon in Paris. The exhibition will run until 7 March 2020.