The bustling city streets of Taipei informed the interiors of this hotel, which design studio Neri&Hu has created within a former residential building.

Situated in the Da'an district of Taipei, the Kimpton Da An Hotel is meant to be an "inner sanctuary" with plenty of spaces for rest and contemplation.

Although the hotel has been designed by Neri&Hu to offer respite from the city, its urban surroundings are referenced frequently throughout the interior.

These references include tiles and metalwork inspired by those found across the city's streets and alleyways, and a restaurant that nods to Taipei's street food culture.

Guests arrive at the 7,500-square-metre hotel in the ground floor lobby where there is a reception lounge wrapped with glossy white tiles, a material that typically clads the city's buildings and shopfronts.

A large void in the lobby ceiling creates a dramatic double-height atrium space where a contemporary chandelier is hung. Other more intimate lounge areas populate the rest of the lobby space, some of which face windows that frame views of the garden outdoors.

The metalwork across the hotel's exterior takes inspiration from what the studio describes as the "layers of craftsmanship" found on the intricate windows and facades in the surrounding neighbourhood. 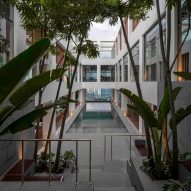 In the hotel's 129 guest rooms, oak walls with built-in storage and internal, mesh-covered windows are used to divide-up the space. These wooden partitions were conceived by Neri&Hu as thresholds that create "in-between" spaces in the rooms.

"The challenge for Kimpton Da An was how to convert a residential building into a hotel due to the idiosyncrasies of the plan," the studio added.

"Enclosed in between the thresholds, this space offers a momentary retreat – an introverted space for contemplation."

In contrast to the quiet guest room experience, the hotel's restaurant embraces a communal dining format that takes note from the city's vibrant street food culture.

A network of walls raised on wooden legs has been lined up to sit just in front of the existing building perimeter, each covered with custom-designed geometric wallpapers or richly coloured fluted tiles.

The walls are punctuated with arched doorways, forming a series of interconnected eating areas. This arrangement is also meant to mimic an enfilade – a suite of rooms that are formally aligned with each other.

Founded by architects Lyndon Neri and Rossana Hu, Chinese design studio Neri&Hu has recently completed another hotel in Kuala Lumpur, Malaysia, which they described as an urban oasis.

The 143-room Alila Bangsar hotel occupies the top eight floors of the 42-storey skyscraper and has a layout arranged around a rooftop pool.