Segway has revealed its latest self-balancing vehicle, the S-Pod — an egg-shaped rideable chair inspired by the Gyrosphere in Jurassic World.

The company describes its latest invention as a "game-changing personal transporter" intended primarily for "enclosed campuses" such as airports and theme parks.

Like the original Segway vehicle for upright riding, the S-Pod is self-balancing and has a centre-of-gravity control system that adjusts the speed based on how much it's tilting forward.

Unlike that vehicle, the S-Pod doesn't require the rider to lean their body to accelerate. Instead, they turn a knob on a navigation panel while relaxing in their seat.

Segway-Ninebot, as the company has been known since a merger in 2015, intends the vehicle for use both indoors and outdoors, particularly within large properties where it could aid mobility.

It cites the the movie Jurassic World's Gyrospheres – rolling spheres in which visitors can explore the dinosaur theme park — as an inspiration.

The S-Pod has a high, rounded back and sides similar to an egg chair, but with more of the form cutaway around the head and shoulders.

Segway-Ninebot emphasises that it affords wide-angle views, further suggesting that sightseeing tours will be a key potential market for the product. 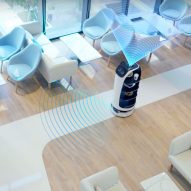 The S-Pod's top speed is 24 miles (38.6 kilometres) per hour. While the two-wheeled ride might look precarious, Segway-Ninebot says it is safe and cannot tip over, because the brakes aren't applied to the wheels but by shifting the centre of gravity.

Segway-Ninebot already has a vast portfolio of vehicles including kickscooters, "hoverboards", e-skates, electric unicycles and a robot companion.

At the Consumer Electronics Show (CES) in Las Vegas last week, where the company unveiled the S-Pod, it also displayed new recreational vehicles, an electric scooter and a moped.

But it said the S-Pod constituted "the first step in Segway working towards their goal of bringing new transportation options to cities".

"Segway-Ninebot has established itself as a category leader in short distance transportation solutions, from innovative delivery robots to kickscooters now used in cities across the world," said CEO Luke Gao. "We are changing the way people move from place to place."

"With an eye towards the future of how cities will evolve, as well as the mobility needs in the off-road space, we are notching up our offerings heading into 2020 so that they will fulfil the mobility needs and expectations of the world of tomorrow."

CES is the world's biggest consumer electronics fair and ran from 7 to 11 January. Other innovations unveiled at this year event include the Ballie robot by Samsung.