FreelandBuck has installed a pavilion in a Palo Alto plaza comprising triangular panels imprinted with images of the public enjoying the same site on a day last year.

Cache Me if You Can is on view in front of the Palo Alto City Hall. Its exterior is printed with images that chart the movement of people, shadow and light in the area on a single day, 31 May 2019.

The studio developed the project to understand the various narratives that occupy a site.

"The project, commissioned by the City of Palo Alto, is a three-dimensional, materialised image documenting the life of the plaza over the course of one day," FreelandBuck said.

"The resulting pavilion engages the idea that there is not one single view, or narrative, that surrounds our experience of architecture."

To construct the installation, the architects used 10 identical triangular panels cut from rigid PVC sheets. Each sheet was perforated with tiny holes and printed with a pattern digitally crafted from a series of documentary images of the site captured by Alex Kim in May 2019.

Kim's pictures were converted into a pattern of overlapping circles, which turned a single pixel of an original photograph into five circles on the installation. From a distance the imagery is clear, but up close it is a blur of colours. 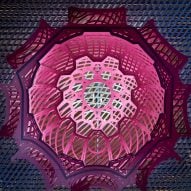 "In this case, we worked with images of the site, articulating them graphically as a pattern of overlapping circles," the designers said. "Each pixel of the photograph produced five circles in a range of hues that, when averaged together, match the hue of the original pixel."

When viewed from its front faces, the imagery matches up with the surrounding pavement, building facade and nearby trees, while the perspective from its angular sides stretches, folds and mirrors the visuals.

"The pattern image aligns with its surroundings: the building's fenestration runs down across folded surfaces of the pavilion, and the plaza's gridded paving pattern extends up to meet it," FreelandBuck said.

Visuals on the surfaces include a child playing with a ball, people leaving and entering the city hall building, and a combination of the light and shadows produced by all of the activities. When viewed from above, the structure matches the shape of the city hall facade.

Visitors can traverse through the openings located on either side of the piece. At night lights installed in the pavilion's interior glow through the perforation.

Cache Me if You Can is on display in King’s Plaza in front of the Palo Alto City Hall until June 2020.

FreelandBuck was founded in 2010 by Brennan Buck and David Freeland. It has offices in Los Angeles and New York City.

In 2017 the team attached colourful perforated plastic fabric to the ceiling of a Smithsonian museum in Washington DC. It also completed a residence in California with an angular roof that took cues from its neighbour's and a multi-leveled home comprised of several stacked volumes.

Photography​ is by Eric Staudenmaier.