A new sleeping mezzanine, a bookcase with a rolling ladder and a sprinkler main painted bright red are among the features in this airy New York apartment that has been updated by local architect Julian King.

The project, called Soho Loft, is located in a cast-iron building that dates to 1872 and once housed a silk warehouse. The project involved the complete overhaul of a long, narrow apartment with wooden floors, an exposed brick wall and a ceiling height of 13 feet (four metres).

Designed by architect Julian King, who runs an eponymous studio in Manhattan, the renovation entailed the removal of walls, a reconfiguration of the layout, and the installment of new finishes and decor.

The goal was to create a more open and light-filled environment – "preserving what makes a classic Soho loft a loft".

The apartment is roughly L-shaped in plan, with the primary living spaces occupying the long portion of the plan.

One of the most significant changes was the relocation of the bedroom, which formerly sat adjacent to a windowed wall. The architect placed the sleeping area atop a newly inserted mezzanine to create a more fluid layout.

Sculptural, white walls enclose the mezzanine, "recalling the flowing silk fabric hung here long ago". Running atop a partial wall is a flexible LED that emits a soft glow.

The sleeping loft is accessed via a wooden staircase. The space underneath the mezzanine contains a laundry area, mechanical equipment and storage.

Adjoining the mezzanine is a bathroom with an undulating wall. A full-height, glass pivot door leads into the bathing area, which features a cantilevering sink, a freestanding tub and waterproof plaster walls. 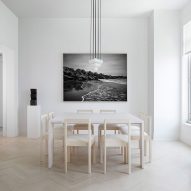 An original sprinkler main is painted cherry red to follow New York City regulations and adds a pop of colour to the snowy white space. The shower is lined with Thassos marble blocks that "catch the light, twinkling subtly beneath the cove lighting".

In the apartment's public area, the architect created an open and austere environment. The north end holds the living room and a tall bookshelf with a rolling ladder. The central area encompasses a dining area with a live-edge walnut table and wooden chairs.

The southern end houses a generous kitchen, where a trio of windows usher in daylight for garden boxes filled with herbs and vegetable plants.

The kitchen is fitted with white cabinetry, concealed appliances and a stove that is seamlessly integrated into a stone island. Every detail is meant to enhance the apartment's streamlined appearance, from the slender sink faucet to a downdraft vent that disappears when not in use. A single, exposed shelf displays bottles and glasses.

"The only above-counter shelf is a custom, steel wine-glass rack bolted to the brick wall and fabricated from I-beams, whose symmetrically welded flanges correspond to the profile of a wine glass base," the architect said in a project description.

The apartment has two entrances – one connected to a stairway, the other to an elevator. For the elevator entrance, which is set off from the main living quarters, the architect created a new foyer.

This vestibule leads to an enclosed study with a built-in murphy bed, enabling the space to be converted into a guest room. A series of folding and pivot doors allow this room to be closed off from the rest of the unit.

Overall, the renovation preserves the apartment's open plan "from end to end" and celebrates its high ceilings, while also honouring the building's history.

"A number of bespoke details transform the previously cluttered space into a clean, open loft that recalls its past and place," the architect said.

Other apartments in New York include an art-filled residence in Lower Manhattan that was outfitted by interior designer Magdalena Keck, a Williamsburg loft that Buro Koray Duman designed for a couple with thousands of books, and a two-storey unit in a former NoMad hotel that was renovated by Worrell Yeung.

Photography is by Michael Moran and Julian King Architect.