The two-bedroom home is located on the 63rd floor of the Four Seasons Private Residences, close to City Hall.

White walls, monochrome furnishings and an abundance of natural light merge to create a minimal, gallery-like space. Furnishings were chosen to complement this pale backdrop, and include a combination of contemporary, vintage, high-end and custom-made designs.

Keck's aim was to create "a sense of oneness and completeness rooted in an awareness of lighting, composition, and balance... underlined by decisive forms", according to a project description. 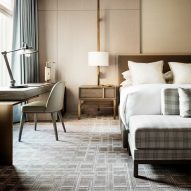 Upon entering, a foyer with four key designs sets the tone for the rest of the residence. These pieces include a braided jute rug by Nanimarquina, a large mirror, a mirrored glass light, and a red I-beam table by Keck.

Throughout the home, furniture is carefully positioned to give the impression of a gallery, in which pieces can be changed over time. "The client is an also designer and photographer with a sensibility that is in tune with mine," said Keck.

On the wall is a large black-and-white photograph of a rocky coast by Robert Andersen, next to a geometric black sculpture by British artist Dominic McHenry.

The lounge area is complete with a vintage black chair and footrest by British designer Victor Pasmore, made from walnut and woven leather, and mid-century rosewood nesting tables by British-German architect Rex Raab for Wilhelm Renz.

"It's a study in how function, form, lines, negative space, and light create harmony when objects and materials are artfully arranged," said Keck.

The master bedroom is furnished with a Piero Lissoni bed, a black 1960s Italian daybed, a Trix floor lamp by Marcel Wanders for Dutch brand Moooi, a Pisa table lamp, and a Pedrera table designed by Antonio Gaudi.

The bedroom features more art, with a trio of photographs of Marfa, Texas, by Andersen, and a Donald Judd print.

Among the pieces custom-designed by Keck are nightstands in a master bedroom, a lucite desk in the guest room, and a low-lying cabinet in the living room.

The Four Seasons Private Residences are located at 30 Park Place, in an 82-storey tower designed by Robert A M Stern Architects – the second tallest residential property in downtown Manhattan.

The 157 residences start at the 39th floor, above a 189-room Four Seasons Hotel with interiors by Yabu Pushelberg.

Keck's other projects in the city include an office with a white rodded staircase and slatted wall designs, which was longlisted for a Dezeen Awards in the interiors category earlier this year.

Photography is by Jeff Cate.