ÉCAL graduate Byongseon Bae has given the drill a non-threatening makeover – replacing its complex exterior and characteristic gun shape with a sleek, monochrome design and simplified functionality.

The resulting product, called Home Tool, can be used as both a manual screwdriver and a cordless drill, simply by applying different bits.

Despite being a power tool, it maintains the straight handle of a regular screwdriver, with a built-in LED-light for use in dark spaces.

The device is not meant for bigger home-improvement projects, but for everyday tasks from furniture assembly all the way down to repairing electronics.

"For a lot of people in their 20s and 30s, being able to drill holes into the wall is almost an unnecessary function because people don't want to damage the wall when it's a rental house," Bae told Dezeen.

"This creates demand for a simple home tool that carries only basic functions and eliminates intricate details – one that is understandable and straightforward so that anyone could use it."

By reducing the amount of possible settings and simplifying the exterior, Bae hopes to make the device less intimidating for first-time users.

"For an amateur, a hand drill can be a scary thing," said the designer.

"Even something as simple as using the sliding switch to change the rotation direction can be confusing, so I reduced it into an intuitive two-button system – pressing the forward button drives in a screw, and pushing the back button unscrews it."

In a preliminary observation study Bae found that, for an average user, the clutch on a drill is completely obsolete. This adjustable dial allows professionals to adjust the amount of torque, or force, that is applied when drilling.

"The numbers on the clutch are meaningless to a novice because they have no clue which one should be chosen for which material," the designer explained.

As a result, she removed the clutch from her design entirely.

Most participants also struggled with the chuck – a clamp designed to hold drill bits of different shapes in place.

Bae simplified the set-up for her Home Tool to work exclusively with hexagonal bits, which means they can be installed more easily and fixed more securely.

The design also forgoes the array of multicoloured buttons and sections that can be found on a classic drill in favour of uniform blocks of colour.

"By making it all one shade, I wanted to make it look like an easy-to-use tool that can blend in with its surroundings in a home," she explained.

"Red as a colour is symbolic of traditional tools like the toolbox and manual screwdriver. I think evoking the memory of the tools they already know means people can utilise the Home Tool with a sense of familiarity."

Beyond fire-engine red, the device also comes in neutral shades of cream and navy – with a container to match.

The briefcase-sized box needed to store a traditional drill is replaced by a compact, stackable case, only slightly larger than an A5 book. 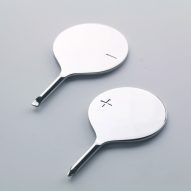 Erdem Selek's PlusMinus screwdrivers are meant to live outside the toolbox

It is designed to be stored on a desk rather than in the attic, and also doubles up as a charging station.

Once the device is charged via the USB port – which can be hooked up to a laptop, power bank or regular plug – the cable can be neatly wound up and stowed away in the designated slot on the bottom of the case.

In her survey, Bae also found that people were likely to misplace essential elements such as screws or dowels in the process of assembling products such as flat-packed furniture.

This lead her to incorporate a series of empty grooves and rivets into the interior of the case which can be used as an inventory tray, while the essential drill bits are safely fastened to the inside of the lid.

Elsewhere, designers have reinterpreted the screwdriver as a desktop ornament and integrated it into a pocket knife for skiers, so they can adjust their bindings on the go.