The brick piers of an old Victorian coach house are incorporated in the facade of this skinny house in New Cross, London, designed by architecture studio Selencky Parsons.

Nestled into a 3.5 metre gap in a Victorian terrace, the project is called The Coach House after the place for parking carriages that once sat on the site.

The Coach House is a slender three-storey building that steps down towards the rear, opening up into an L-shaped living area that overlooks a garden.

Three horizontal bands coated in micro-cement protrude out from the front facade.

These angled projections form a canopy over the entrance and mediate the step forward between the two buildings either side,

"We wanted to create an intriguing street facade, using architectural elements drawn from the wider rhythm of the street but reinterpreted and implemented in a playful way," studio founder Sam Selencky told Dezeen.

Stone paving in this entry area references the former coach house's brick floor, which allowed carts to be driven into the building.

An entrance lobby and long, brick-lined passage frame views towards the garden at the rear.

The passage passes a utility room and larder on either side of a central staircase situated in a lightwell to help illuminate the deep plan.

"The triple-height lightwell pierces through the centre of the house, bringing light down and importantly breaking up what would otherwise be a tight circulation corridor, instead creating an unexpected moment of space," said Selencky.

The Coach House has an open-plan kitchen and dining area in a wider area at the back.

A living space sits lower, slightly sunken to create a distinct area that surrounds a fireplace.

This step down also allowed for the creation of a slim window above that pulls in light between the living and dining areas. 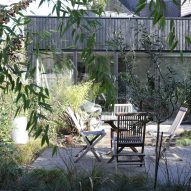 "Creating distinct zones within a large open-plan space is a thread that is common to many of our projects," said Selencky.

"For The Coach House we have played with materials and levels to distinguish the living areas from the kitchen and dining space."

Full-height glazing with sliding doors opens the dining and living areas onto a paved external terrace.

Steps lead up to a garden, ending in an another seating area covered by a wooden trellis.

Bedrooms occupy the first and second floors of the thin volume.

They sit on either side of the staircase, taking advantage of views out to the street or the garden behind.

Selencky Parsons was founded by Sam Selencky and David Parsons. Previous projects include a cork-lined pod for the firm's own studio in London and a stepped extension to a 1960s terraced house.