Designer Julia Lohmann's Department of Seaweed is showing a pavilion made of kelp and rattan at the World Economic Forum conference in Davos, where world leaders have met this week.

Called Hidaka Ohmu, the organically shaped pavilion is formed from semi-translucent panels of a large seaweed – or macroalgae – called kelp, laid over a rattan frame.

The kelp is treated to remain flexible so that it can be stretched like leather.

It is installed against a window in the conference centre, and is designed to appears like it is growing out of it. A series of nodules protrude from its roof, with others attached further along the glass window.

The Davos pavilion draws on the sinuous Oki Naganode work that Lohmann installed at London's V&A Museum in 2013, which was also made from seaweed panels stretched over a rattan structure.

Visitors can enter the Davos pavilion through an opening in its side, to sit on a bench inside that has views of the snowy Swiss landscape outside.

Lohmann's pavilion aims to bring a multi-sensory experience of nature into the otherwise sterile conference building.

The colour of the kelp panels change from yellow to orange to brown, depending on the light and the time of day. It also gives off a salty scent of the sea.

The designer, who has previously designed laser-cut kelp lampshades, hopes that the structure will engage conference delegates with the issues facing the natural world, in particular the challenges of climate change. 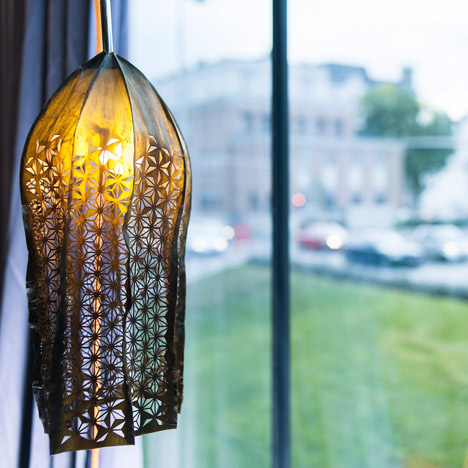 "We need an empathic, more than human-centric way of engaging with nature," said Lohmann.

"Every species has an equal right to life on this planet. We can use the same human ingenuity that has led to the climate crisis we are facing now – and design has a lot to answer for in this – to protect and regenerate the ecosystem that sustains us."

The pavilion's name comes from the particular kind of hidaka kelp that it is made from – the same sort of kelp or "konbu" used to make the Japanese cooking stock called dashi.

Ohmu comes from its resemblance to the insect-like creatures of the same name from the 1984 Japanese animated film Nausicaä of the Valley of the Wind.

The Department of Seaweed has also been running prototyping workshops where delegates can experience creating objects with seaweed themselves.

The aim is to make "science and our complex relationship with nature and natural resources tangible".

Lohmann's installation forms one part of Partnering with Nature, an exhibition at the conference curated by New York's Cooper Hewitt museum, on the back of its Nature triennial that closed this week.

The German-born designer founded The Department of Seaweed in 2013, during her studies at London's Royal College of Art and as designer-in-residence at the Victoria & Albert Museum.

She teaches in the design department at Aalto University in Finland, where she also conducts material and bio-colour research projects involving algae, as part of the institutions joint chemistry and arts programme.