Architects Peter McNeil and Clarissa Nam have built two detached houses on a corner lot in Toronto to live in and use as a rental property.

Semi Semi is the first home of McNeil and Nam, the co-founders of COMN Architects, which stands for Collaboration between Peter McNeil and Clarissa Nam.

The project came about as a solution for their own housing needs, which they were trying to fulfil on a tight budget.

"In the City of Toronto, single-family detached homes have become out of reach for many, and intensification efforts have come mainly in the form of high-rise condominiums," said COMN Architects.

"There is a lack of medium density, ground-related housing options, often referred to as the missing middle."

The architects identified a narrow lot measuring 16 by 78 feet (4.87 by 23.77 metres) with a run-down home on it that could be turned into two dwellings. The project is located in Greektown, not far from the city centre.

"The corner lot was divided perpendicular to its side lot lines, allowing each frontage to be addressed with an entrance," the studio said.

The two three-storey dwellings are separated down the middle by a central volume fronted by grey fibre-cement panels, which hosts each home's staircase, restrooms, and closets. The main houses are covered in white and located at either extremity of the building for more sound privacy.

Each unit measures roughly 1,000 square feet (93 square metres) and has three stories arrange in a split-level configuration and a similar layout. 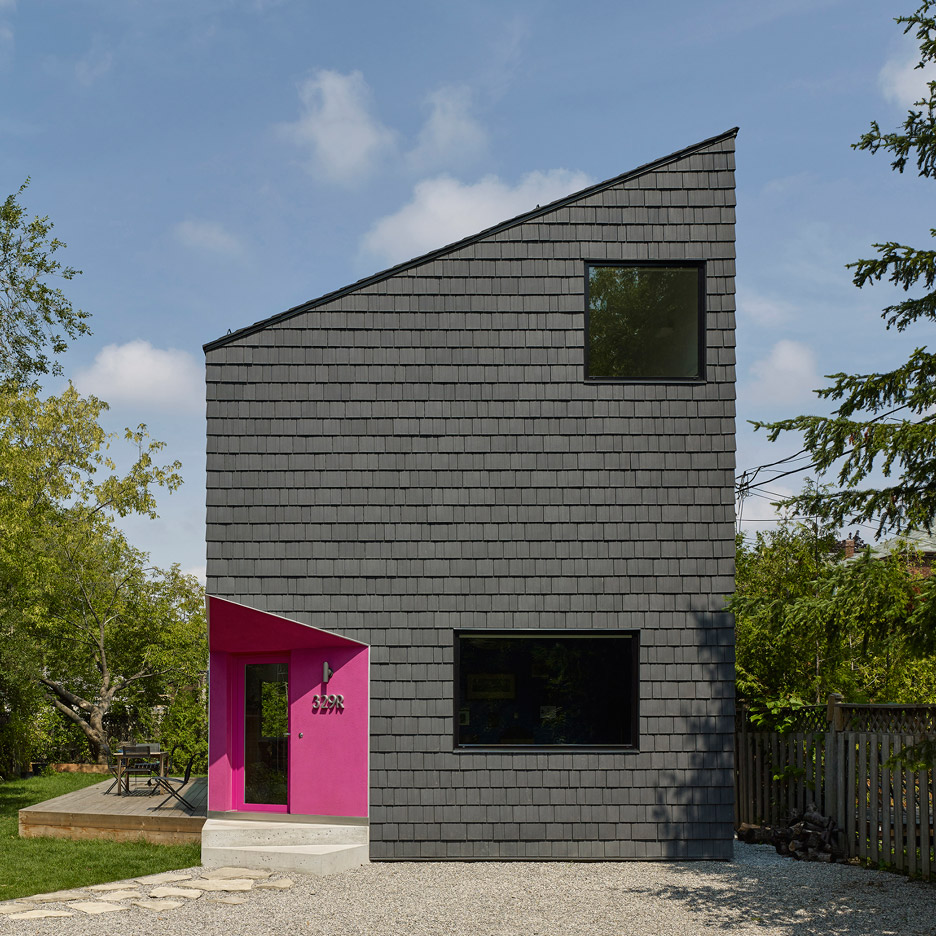 The master bedroom is on the top level and an open-plan kitchen, living and dining room on the middle floor. On the lower level of McNeil and Nam's unit is a home office that doubles as a guest bedroom. The rental unit, meanwhile, has a dedicated second bedroom.

"Each function-specific level bleeds into the next, with an openness and sequence of space evocative of a much larger home," said COMN Architects.

Despite the compact footprint, each home still includes an outdoor terrace on the top level. A perforated aluminium screen that runs along the height of the facade provides some privacy and shading to the outdoor space.

The interior decor is pared back in order to maximise light within the home. Certain features such as open-tread staircases and all-white walls help to achieve this.

They chose a selection of mid-century-inspired furniture to match the aesthetic of all-white interiors and wooden floors. "Open riser stairs and a minimal all-white kitchen blend in seamlessly, and reduce visual mass," said the studio.

Also in Toronto, Reigo and Bauer have subdivided a plot of land on which to build a much smaller house for a couple eager to downsize. La Shed, an architecture office from Montreal, also used a split-level configuration to maximise living space in their extension to a single-family home.