An overhanging canopy shades the cascading exhibition spaces and outdoor terraces that make up Shigeru Ban's gallery at the Tainan Art Museum.

Revealed in new photos by Paulo dos Sousa, the recently completed museum in Taiwan is designed by Pritzker Prize-winning architect Ban's studio with Shi Zhao Yon to evoke a Royal Poinciana – the official tree of Tainan.

It is one of two buildings that form the Tainan Art Museum. The second will be another gallery contained within an old police station dating back to the 1930s that is currently under renovation.

Located in the West Central District, Shigeru Ban Architects' contribution to the Tainan Art Museum opened in January 2019. It hosts a collection of works and artefacts spanning 400 years by both Taiwanese and overseas artists.

The Japanese studio first revealed its proposal in 2014 after winning an international contest for the building's design that was held by the local government to aid the development of the city's fine arts industry.

The new photographs reveal the building's distinctive white form that is composed of 2,508 square-metres of exhibition space, stacked over five storeys.

Shaded by the pentagonal, fractal canopy, this complex building form takes its cues from the Royal Poinciana tree in a bid to reduce its visual impact and prevent an imposing facade. 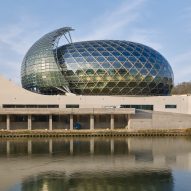 "If a building takes a square form, the sense of direction and frontage becomes too strong," explained Ban on the studio's website.

"I thought of a large pentagon-shaped frame that encompasses the gallery boxes, which also weakens the sense of main frontage by facing in all directions, allowing visitors to approach from many different directions."

Dispersed in between the exhibition spaces are a mix of outdoor terraces, staircases and entrances.

Shigeru Ban Architects' incorporation of outdoor zones is designed to help soften the building's visual impact even further, while also providing locals with space to relax within the dense cityscape.

"When walking around the site during the initial site visit, my first concern was that in this city where the buildings are so densely built up, there was no park space for relaxation serving the citizens," said Ban.

"I thought of a building typology where the art museum and the activities of the park are not separate, but rather an integrated whole, make it possible to freely go out into the park from within the museum, or have park visitors, without realising it, enter and enjoy the museum."

The gallery is complete with a theatre, children's art centre, a studio, a gift shop, a cafe and a restaurant.

It will shortly be joined by Tainan Art Museum's second building that will host more gallery spaces, as well as administration offices, shops and a food court.

Japanese architect Ban founded Shigeru Ban Architects in Tokyo in 1985. Best-known for projects such as the Cardboard Cathedral in New Zealand, he was named as the 2014 laureate of the Pritzker Architecture Prize in 2014.

Other recently completed projects by the practice include a boutique hotel that winds through woodland in Japan, a trio of pyramids for a whiskey distillery in Kentucky and the interiors for the "world's tallest" hybrid timber tower in Vancouver.

Photography is by Paulo dos Sousa.