Swedish furniture brand Massproductions is set to release an outdoor sofa at Stockholm Design Week that mimics the welded steel barriers that are often erected at concerts to manage the crowd.

Named Roadie, after the workers who assemble these barricades, the piece will be launched at the Stockholm Furniture & Light Fair when it kicks off on 4 February.

Its curved, raw metal body consists almost entirely of metal rods – two horizontal ones used to form the frame, and a row of vertical ones that are bent to create the seat with its high back.

Despite being a two metre long, three-seater sofa, it weighs only 16 kilograms and can easily be moved and stacked by a single person.

In this way, the product evokes crowd-control barriers both on a functional and a visual level.

"In their current form, they have been appearing on city streets from the early 1950s," designer-in-chief Chris Martin told Dezeen.

"Although a bit rough and not especially beautiful, they are interesting as there is no common standard for them. It's a design that has evolved independently and in parallel around the world. They may be a rare example of a meme artefact."

The tubes that form Roadie are made from aluminium, which has been recycled from discarded drinks cans and heat-treated for strength.

To create the final product, these are given an outdoor powder-coat finish in metallic silver, petrol blue or butter yellow.

The Massproductions plaque on the back of the frame was made by a manufacturer of bicycle name-plates, and nods to the kind that are usually found on expensive bikes.

With its gently curved shape – based on the brand's existing Dandy sofa – Roadie lends itself to being used in multiples and combined into larger, circular formations to facilitate conversation.

This is also how the product is set to be presented as part of an installation at Stockholm Design Week, where it will be arranged around a central fireplace and covered by a sweeping bell tent.

Called I'm Slow, the event will feature music from DJs Axel Boman and Nadja Chatti as well as Swedish synthpop group Kite in the hopes of helping visitors "step off the treadmill of the typical design fair experience".

"The design fair is an important part of our operation, it gives us a deadline to work to and sets the structure for the entire year's work," explained CEO Magnus Elebäck who designed the installation.

"But we wouldn't mind if it changed to every other year, either." 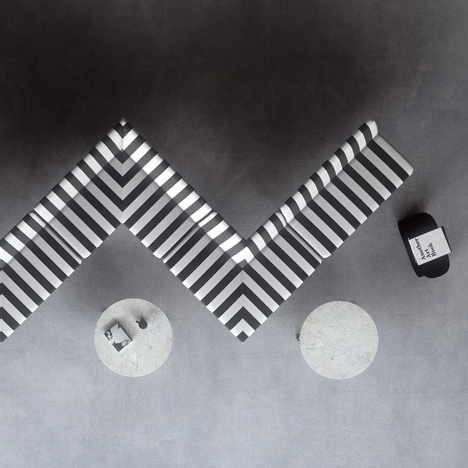 This, he explained, would give designers time to produce fewer, better things with long-lasting value, like the brand set out to do with Roadie.

"The product has been carefully and methodically designed over the last 18 months," added Martin, "resulting in a valid and useful product that will endure in the marketplace – we hope."

Although the name Massproductions, and the method it describes, might appear contrary to this slow design philosophy, Elebäck argues that in reality they are far from mutually exclusive.

"The risks and the responsibilities for a furniture company are bigger when producing in volume and that means careful preparation and thought at the design stage. And that, of course, takes time."

From 3-9 February, Stockholm Design Week will see more than 200 events taking place in venues, showrooms and galleries across the city.

At its heart is the annual Furniture & Light Fair, whose more than 700 exhibitors make it the largest design-led trade show in Scandinavia.