Furniture and interior designer Carol Egan was influenced by the form of dragonflies when creating this sculptural collection, which was launched at an exhibition staged in New York gallery Maison Gerard.

Decade follows the evolution of Egan's use of material and form by showcasing her early works, commissioned pieces and prototypes alongside new designs including a shelf, coffee table and a pair of sconces.

The work was exhibited in Maison Gerard's uptown gallery at The Elizabeth Collective, a former residence of actress Elizabeth Taylor known for its beaux-arts interior and decorative plasterwork. It was on display in the Manhattan townhouse at 10 West 56th Street from 22 to 29 January and can now be seen at their gallery downtown at 43 East 10th Street

"Typically the work is shown in the gallery downtown in a more modern context or at design fairs where it's kind of a white box aesthetic," Egan told Dezeen. "So it's really a treat to have it in such a classical space with all the beautiful plasterwork and this sort of proportion and elegance in this townhouse.

"To see the juxtaposition of this modernity against that I think that it holds up," she added.

Egan experiments with different materials, such as bronze, marble and wood, in her designs that range from consoles, chairs, shelves to light fixtures and tables

Her latest outputs include the Double Emperor wall shelf, which is crafted in bronze and wood. It required a lot of hand labour to give it its recognisable chamfered edges and curved forms that drawing on the wing formation of dragonflies. 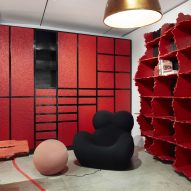 This involved clamping together several stacked laminations, while the bronze piece was shaped by wrapping it around a steel plate and welding it in place.

Egan told Dezeen she plans to continue to experiment with the material and colour of these products.

"We're going to be making the sconces in the bronze material and also in painted finish with colour, the mesh painted blue and the frame in white and that will completely transform the appeal of the fixture," she said.

"What I'm doing a lot is playing with the material in my work, like the bench in walnut compared to carved carrera feels like a different piece to steel," she added. "We kind of reiterate the forms in different materials to see how the material informs the line of the pieces."

The new launches follow on from older works by Egan, who founded her firm Carol Egan Interiors in 2002.

These involved experiments with wood, which was then applied to other materials such as metal, acrylic and stone. Stools, benches, side tables, consoles and shelves often feature the same twisted X-shape design.

Decade also included a large cylindrical chandelier Egan created as a commission for a client. It is intended for outdoor use and comprises a mesh of blackened steel with a spiral curving around its faces.

All of the works in the exhibition were staged alongside photography from Jean-Francois Jaussaud of his series profiling French American artist Louise Bourgeois in her studio.

Maison Gerard was established in 1974 and specialises in showcasing French collectables. It has three gallery locations in New York City.

Other recent exhibitions in New York include Age of Contaminations, which staged prototypes and realised pieces from Italian designer Gaetano Pesce.

Photography is by Michael Mundy.