A jagged edged bookshelf and a series of modular armchairs are among the rare and limited-edition furniture designs by Italian architect and designer Gaetano Pesce on show at New York gallery Friedman Benda.

Age of Contaminations brings together prototypes and realised designs that the 79-year-old created between 1968 to 1995.

"Age of Contaminations looks back on Pesce's legacy as a provocateur, rule-breaker, and an essential influence on the evolution of contemporary design," Friedman Benda said.

Its title is a reference to a 1972 installation at the Museum of Modern Art that featured the architect's work "Project for an Underground City in the Age of Great Contaminations," a fictionalised archeological discovery in 3000 BCE of an underground habitat from 2000 BCE.

The selected works are intended to show Pesce's "radical experimentation" with materiality and production methods. Featuring rough and jagged edges, and playful shapes, he refused to conform to the traditional modern style popular at the time of their making.

"Pesce's radical experimentation with industrial and everyday materials such as polyurethanes and poured resins broke the mould of standardisation," the gallery said. "Inventing techniques that would produce variable results that embraced flaws and mistakes, he refused to follow the modernist ideology of regularity and perfection dominant at the time."

"By refusing to adhere to traditional boundaries between architecture, sculpture, and conceptual art, Pesce's cross-contamination between genres consequentially altered the landscape of design and was a catalyst for the establishment of the contemporary studio practice," it added. 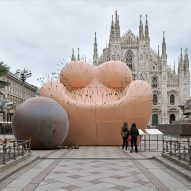 On display is a grouping of Yeti Armchairs, modular furniture constructed with polyurethane foam and upholstered with white fabric, detailed with matching buttons.

Also featured in the exhibition is a black version of Gaetano Pesce's Up5 chair and a red Up6 pouff . The Italian designer is  known globally for his Up furniture series, modelled after the shape of a woman's body. This year feminists criticised the designer after he installed an eight-metre high version of the Up5 armchair and Up6 footstool in Milan's for the city's design week.

Pesce's Moloch Floor Lamp uses anodised aluminium to create an adjustable stand paired with a painted aluminium shade and base.

Black glass bricks stack on top of one another to form the legs of an early version of the designer's Golgotha Table. Red resin was used on the tabletop surface to give the allusion that the material is dripping off the piece.

Several custom pieces Pesce created for the private apartment of Italian professor Alberto Carenza are also presented for the first time in the exhibition. One of these works is the "eponymous monumental" Carenza Bookcase, a red and black shelving with jagged edges coated in epoxy resin.

Gaetano Pesce: Age of Contaminations is on display at Friedman Benda in New York 24 October to 14 December.

Friedman Benda opened its New York City gallery in 2007. Other recent exhibitions there include a collection of works by Heatherwick Studio, Paul Cocksedge and Nendo that celebrate Generation X and Lebanese designer Najla El Zein's sculptural furnishings influenced by pregnancy and seduction.

Photography is courtesy of Friedman Benda.