Electric vehicle company Arrival has co-developed a fleet of 10,000 electric vans with UPS in the delivery service's signature livery.

The electric vans, which are specially developed versions of the UK startup's Generation 2 model, will be rolled out across the UK, Europe and the US between 2020 and 2024.

Wheels are attached to a skateboard-style bed that is flat from front to rear, with identical wheelhouses.

This allows the vehicles to be built by robots in smaller, more flexible micro-factories rather than traditional, conveyer-belt factories.

Arrival's vehicles are modular, so that parts can be swapped out over the vehicle's lifetime to improve and upgrade.

Rather than building an entirely new vehicle at the end of its life, the materials can be reused, and any defunct parts replaced.

With more people buying online, a greater number of vehicles are needed to deliver the increased number of packages. Up to 1.5 million packages are delivered every day in New York City alone.

Arrival's electric vehicles are the same price as the diesel or petrol equivalent and are 50 per cent cheaper to run.

The vans have a range of up to 300 miles on one charge.

Arrival's software can be updated immediately, and the vehicles can be programmed to be autonomous. 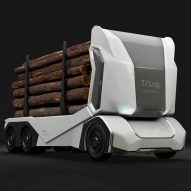 "This gives fleet managers a highly compelling commercial and environmental reason to switch to electric and will accelerate the adoption of electric technology globally," he continued.

Arrival was founded in 2015 by Denis Sverdlov  and is headquartered in London.

A small flock of customised electric vehicles produced by Arrival for Royal Mail were rolled out in a pilot scheme across central London in 2017.

The prototypes currently being used by Royal Mail to deliver London's letters have wing mirrors, but Arrival plans to eventually replace these with cameras for monitoring traffic around the vehicles.