Hem has designed its own headquarters at the centre of Stockholm, with interiors by the furniture brand's in-house design team and Atelier Paul Vaugoyeau.

A focal point of the HQ is a three-metre-long edition of Hem's Puffy Brick counter that's covered in amorphous, acid-yellow blocks.

London-based art and design studio Soft Baroque produced the counter by injecting balloons with concrete and then arranging them in a mould.

The 750-square-metre headquarters were needed to house Hem's Stockholm-based team, which doubled in size over 2019, outgrowing the constraints of their previous workspace.

Hem's founder, Petrus Palmér, says that the HQ will also be "where [the brand's] experiments materialise".

"We have a lot of different needs such as environments for focused coding, a workshop for furniture mock-ups, a showroom space for customers etc," Palmér told Dezeen.

"With the new office, we were able to design the space from scratch, catering to all those needs, and practise what we preach – creating inspirational environments for people to thrive in."

Black desks and high-back chairs have been dotted amongst the building's chunky concrete structural columns.

The same furnishings appear in the office's glass-fronted meeting rooms, where groups of staff can head for privacy or more focused tasks. 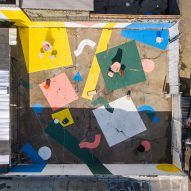 Atelier Paul Vaugoyeau has also "hacked" certain furnishings to elevate them from their standard office aesthetic. Simple MDF storage cabinets have been washed with a clear lacquer to highlight the natural hue of the timber.

The gridded ceiling has also been left exposed to frame views of the building's busy network of ventilation pipes.

"The bulk of Hem's business is with interior designers and progressive offices that usually avoid typical office elements, since it's seen as uncreative," added Palmér.

"Paul Vaugoyeau, who designed the architectural elements, shows that just by tweaking standard choices such as a grid ceiling or file cabinets, you can create a unique environment."

Hem's relocation to new head offices coincides with the beginning of the city's design week.

The event has so far seen Swedish brand Massproductions release an outdoor sofa that is meant to resemble the welded steel barriers erected at concerts to control crowds.