London design trade fair 100% Design will rebrand as Design London in time for London Design Festival 2020, and move from Olympia in the west of the city to the new Design District in Greenwich.

The newly named Design London fair will take place for the first time from 16 to 19 September 2020, as part of this year's London Design Festival.

The fair, which has been owned by Media10 since 2012, will be curated thematically, and like its predecessor 100% Design, will feature a programme of talks.

"It is an incredibly exciting time for design in the capital," said Media10 CEO, Lee Newton. "Design London will showcase a highly curated selection of brands, each of which produces groundbreaking and original products."

Name aligns with other Media10 fairs

The change in name will align the design fair with the three other fairs around the world run by the Essex-based media and events company.

Each of Media 10's fairs – including Design Beijing and Design Joburg – is now named after the city where it takes place. The company also founded Design Shanghai, which announced last week that it would postpone its March event due to coronavirus, and is now under new ownership.

The name change also "furthers the potential to open other design fairs internationally" following the same format, according to Newton.

After five years at the Olympia London exhibition centre in Hammersmith, west London, the newly named fair will move to Magazine London, a new purpose-built event space in Greenwich, near London's Docklands.

The fair will sit alongside the new Design District in Greenwich Peninsula, masterminded by developer Knight Dragon. It offers "purpose-built permanently affordable spaces from desks to clean and dirty workshops" for up to 1,800 creatives.

The district will feature 16 buildings designed by eight architects including SelgasCano, 6a Architects, Mole and David Kohn Architects. It launches in September 2020, at the same time as Design London.

The hangar-like 19,994 square-metre Magazine London space is the largest of its kind in the city and is defined by its "simple architectural form".

"Magazine London provides the perfect backdrop for presenting contemporary design and I have no doubt that this will be a highlight of LDF 2020," said Newton.

The venue also allows access to The Pylon, an upended electricity pylon by artist Alex Chinneck – a well-known local landmark.

The fair organisers also hope that Greenwich Peninsula will attract more visitors as they believe it is better connected than Olympia.

"The move was prompted mainly by our perception of Magazine London as an exciting new venue within a dynamic new design district (which will ultimately house close to 2,000 creatives)," said Design London. 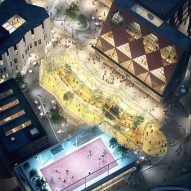 "There will be great transport links, compared to Olympia, making it easy to get there. Not many other London venues allow you to arrive by cable car or boat!"

A five-kilometre-long park called The Tide opened in Greenwich last summer. Designed by Diller Scofidio + Renfro, the architecture studio behind the High Line, and Neiheiser Argyros, the route stretches from the underground station at North Greenwich to waterfront events space The Jetty.