Working on tourism projects in Brazil could help alleviate poverty and reduce destruction of the rainforests, according to BIG partner Kai-Uwe Bergmann.

Bergmann added that the firm does not condone the policies of the country's controversial president Jair Bolsonaro.

Responding to criticism of BIG founder Bjarke Ingels' recent meeting with Bolsonaro, Bergmann said the firm was not working for the president and that architects should engage with, rather than walk away from, complex issues.

He added that BIG has in the past resigned from projects on ethical grounds, but said that refusing to work in places like Brazil because you don't agree with its political leadership is not the right approach.

"We're not working for Bolsonaro."

"In no way do we condone Bolsonaro," Bergmann said after giving a lecture at Stockholm Furniture & Light Fair in Sweden this week. "I want to make it specifically clear, we're not working for Bolsonaro."

The architect compared the situation with working in the US, where the New York-headquartered firm has a number of projects underway despite not agreeing with the policies of president Donald Trump. 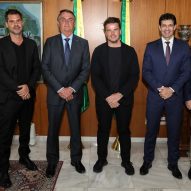 "We have the same opinions about Trump as we do Bolsonaro," he continued. "Working for the National Park Service [...] doesn't mean that you're working for Trump."

Bergmann said that Ingels' visit to Brazil was related to a project with the country's national park agency, as part of an initiative "to improve the economic abilities" in northeast of Brazil.

The project, he said, could offer a way to alleviate poverty in the region, where local people have no economic alternative to slash-and-burn agriculture – whereby pockets of virgin forest are burned to create space for crops. In turn, this would protect the rainforest, according to Bergmann.

"There's no support for the agriculture so they use slash-and-burn techniques to actually create fertilised earth the fastest," Bergmann said. "Slash and burn is the actual root cause of the forest fires."

"If we can actually start thinking about how to offer a variety of economic possibilities for the people in the northeast of Brazil, then perhaps they don't have to slash and burn," he continued.

Shortly afterwards, Ingels defended the meeting and described the backlash as an "oversimplification of a complex world".

Bergmann made the comments in response to a question from a member of the audience at Stockholm Furniture & Light Fair 2020, where he was giving a talk yesterday.

Addressing critics who feel that BIG does not care about ethical issues, he gave details of two projects the firm has pulled out of due to unease about the client's intentions.

"We started a project in South Korea for one of the conglomerates to do a solar research facility," he said. "Halfway through the project, they changed it into a drone manufacturing plant and we asked the question, 'how are these drones to be used?' They wouldn't tell us, so we pulled out of that project."

Bergmann also cited the National Library project in Kazakhstan, which they dropped "when it turned into a glorification of the leader".

Dezeen broadcasted a number of talks on the first day of the event, which takes place at Stockholmmassan in the Swedish capital from 4 to 8 February.

They included a lecture by London-based studio Doshi Levien about its design process and a discussion between Emma Olbers and Emeco CEO Gregg Buchbinder on how the furniture industry can help reduce greenhouse gas emissions.

Bergmann is one of 17 partners that lead international firm BIG, which Ingels founded in 2005. He is a registered architect in 13 US states and oversees the firm's business development and communications.

Photograph is courtesy on Flemming Leitorp.